Warbringer are one of the bands at the forefront of the thrash-revival, and are doing well. With their third album being highly anticipated, I decided to check out this, their second album, to see what the buzz was about, and, having listened to the album, I think my query is answered. 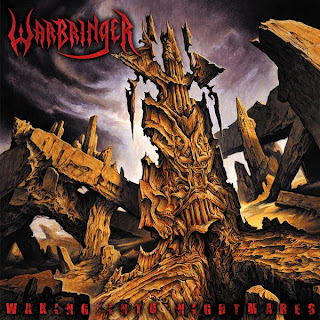 A lot of Waking Into Nightmares sounds hugely energetic, speedy, and in places downright rabid. The music bursts forth from speakers like a torrent of intensely riff-driven thrash, stripping flesh-from-bone, and inducing headbanging wherever it goes. Not one song goes by without at least one meaty, heavy and deliciously thrashy riff in it, with a lot more chunkiness and muscle than I've come to expect from many of the new-wave thrash acts. Another distinct advantage of not having riffs which are nicely structured is that the songs are a lot more distinct, and most of the songs are more memorable than those of many of the bands peers. Warbringer seem to be drawing a lot of influence from Testament and Exodus, especially, and it's quite evident in their songs, for example, there is a strong sense of  Testament in "Abandoned by Time". Rather than being annoying, I found this to be genuinely quite reassuring and pleasing, with a sense of nostalgia, but also musical heritage.

The lead work, too, is enjoyable, and plenty of emphasis is placed upon it in the songs, which adds something to the music. The lead guitar is quite recognisable, and the band certainly have it as something of a signature, and if the band last for a good many years, there will certainly be such a thing recognised as a "Warbringer" style solo. The band also demonstrate their diversity with the epic-sounding, somewhat relaxed "Nightmare Anatomy" - a surreal sounding song, with some genuine uniqueness around it, something which modern thrash needs all it can get of, as is the song after it, which genuinely sounds unlike any thrash song I've listened to in a long time, if ever. With an interesting range of hooks, and vocals which sound like everything from Martin Van Drunen to Tom Araya.


About four songs into the album, I found myself really looking forward to the next song, as soon as the last had finished. If that's not the sign of a good listen, then I'm not sure what is. Certainly, the thrash revival are criticised for being unoriginal, but Warbringer are extremely good at what they do, and that is timeless.