Death are undeniably one of the most influential bands in death-metal, and, for that matter, in extreme metal as a whole. Spiritual Healing, the bands third album represents a mature, complete sound, Crisp and well produced, the album represents the band going from strength to strength. 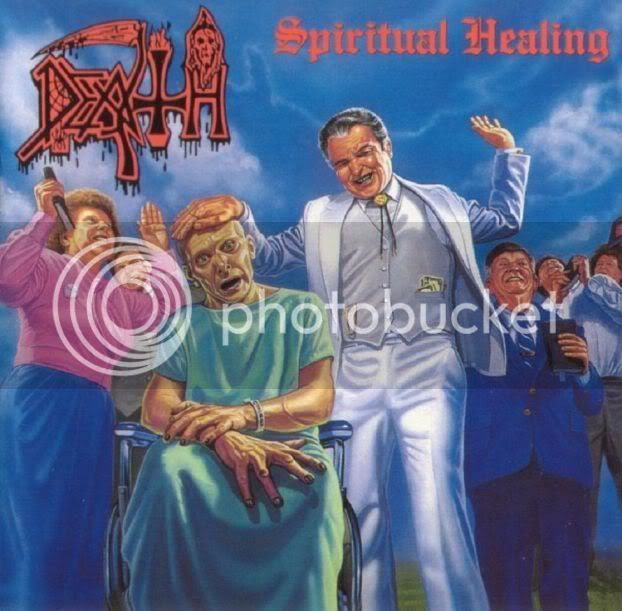 Having essentially pioneered the genre of death-metal, there's really no question that Death are excellent in executing the style, and this album is no exception. Death knew what they were doing, years before other genre defining bands had gotten into the business of releasing albums. In Spiritual Healing, the huge underlying thrash influence is as apparent as ever, and I often think that had Death emerged today, they would have been lumped into the death-thrash category, as opposed to the death-metal one. Nonetheless, the hallmarks of death-metal are undisputedly present - the guttural vocals, crushing tone, and lyrical themes are all present, and are stylishly done, but combined with thrashy energy and speed - whilst thousands of bands have been influenced by Death, few manage to emulate their style, especially their guitar work, which is without compare, despite being part of a band made up almost exclusively of hugely gifted musicians.

While the two albums prior to spiritual healing were similar in style, the production values of this album make it stand out further - capturing the bands energy better than the somewhat muddy production values of the previous two. In this album, Death are an altogether sharper instrument, and the fog of poor production is pushed back to reveal more of the intricate, excellent music going on in each and every song. The thrash which always hides, just beneath the surface also adds to the music. Compared to a lot of extreme metal, Death's material is quite memorable, perhaps in part due to the diversity within it - Death make use of more than just blastbeats,  (which weren't hugely in vogue at the time, anyway) instead utilising mainly thrashy 2/4 and 4/4 beats, which add a bit of space to enjoy the music, and causes the songs not to possess the similarity which many blastbeat driven death-metal bands possess.


Spiritual Healing continues in the vein of it's predecessors, but it is certainly the album in which Death came into their own, and all of the records attributes reflect this, from the increase in production value to the increasing songwriting skill, Death begin to blow  me away on this album.