Speed-metal band Skull Fist demonstrate Canada's ability to do things a little differently when it comes to metal. "Head of the Pack" is the bands first full length, and demonstrates, along with the band's excellent playing and catchiness, their toungue-in-cheek humour, and light-hearted but heavy as hell musical attitude. If you can get over the unsightly cover-art, the album is an excellent listen. 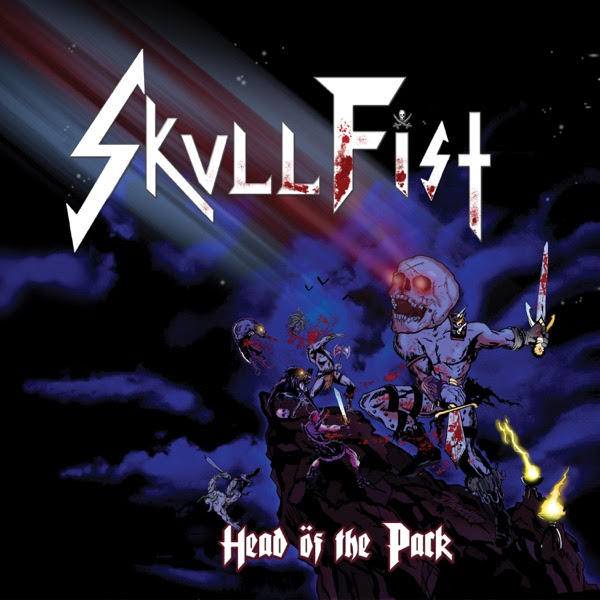 The album bursts into life with virtuosic lead guitar, and old school sounding rhythm, almost exactly in the style that I'd consider to be "quintessential" speed metal, which is only boosted by the high-pitch vocals, which sound rather unique, be it in the style they are projected, or in the accent they are sung. Everything about the album sounds rather old-school, but I'd hesitate to place the band in the "New wave of traditional-metal" which many bands of a similar age and aesthetic - Skull Fist are overtly doing something entirely different, albeit something which is different not quite entirely in sound or aesthetic, more to do with the very spirit of the music. Many retro-traditional bands set out to create the sound - Skull fist seem to be more likely to have simply arrived at the sound they have through spending time in the company of a desire to make heavy music, an entirely organic, non-forced process. Skull fist almost sounds like their sound has been cross-bred with a hint of glam-metal, with the occasional moment of sounding like Motley Crue punctuating the album, albeit in a good way.

Often, a very technically able band will have trouble creating songs which are catchy, but this seems to prove almost no problem to this band, managing to blend aspects of great technical ability with catchiness and punching-power in a lot of their riffage, and sweet melody in the lead. The vocals too, are breath-taking, in terms of range, competence, and memorability, the latter of which is boosted sky high by some fantastic vocal licks. The bands sound is nicely encapsulated by the production, with possibly the most orgasmic snare-sound I've encountered in a month or two. Everything comes out quite nicely in the production, but the production itself remains pleasingly unpolished, unshaven, and individual, as opposed to the much-feared plastic sound too many bands have adopted. The album feels nicely rounded in this way, and feels very whole.


There aren't, cover art excluded, many points of complaint on the album, definitely none of which spoilt it as a listen. It's quite a unique set of songs, and I found that that made it all the more pleasing. It also strongly demonstrates that young metal-bands still have a lot to offer the scene.