Attick Demons have been around for a good fifteen years, and were, untill recently, completely without an album. "Atlantis" marks the first full-length offering on the bands part, and seems a solid, well planned, and certainly well polished release. And yes, I'll get to the point, He sounds a lot like Bruce Dickinson. 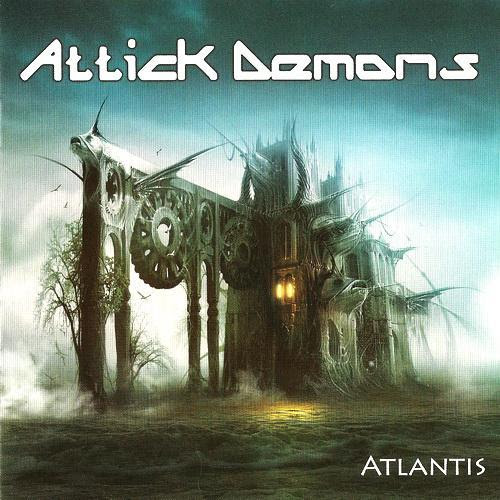 Listening to the album is, admittedly, something of a confusing experience. The vocalist, Artur Almeida, sounds strikingly, dare I say, unnaturally similar to Bruce Dickinson, but, thankfully, the band are distinct enough to be worthy of enjoyment. Despite sounding massively like Iron Maiden, Both instrumentally and vocally, the band certainly possess elements which make them something more than a mere 'Maiden clone. The power metal elements are very apparent in the bands sound, and a lot of the musical devices employed are things which 'Maiden simply wouldn't do. The album is very well written, and solid, with extremely well-planned sounding songs abound, and what I can only conclude to be a complete absence of filler. When you manage to get the Iron Maiden association, which seems to have both blessed and cursed the band, out of your head, the music reveals itself to be a powerful brew in it's own right, possessing superb traditional stylings, blended with intense, non-flowery power-metal epicness.

I had the inclination that something good had been discovered by the amount of attention this seemingly little-known band had begun to receive around the Internet after the albums release, and, as far as my ears tell me, I wasn't far off. Attick Demons seem to manage to do a bit of everything, and in nice ratio's too. The blend of traditional and power-metal styles is smooth, and reminds me of Pharaoh, and, despite being so similar to a certain someone, the vocals are undoubtedly those of a virtuoso. In just over forty-five minutes of music, the band have gotten a lot done, there are catchy songs, songs of great epicness, and one of them even has an excellent duet vocal. Essentially, this album has something for everyone, and if Iron Maiden were to release it, it would almost certainly become a classic. Perhaps that says something about the alteration of perception by a name, a reputation. Perhaps Attick Demons' future is uncertain, but I'm going to declare that, based on the strength of this debut, they may not be quite as obscure for long.


Perhaps the band isn't the most original sounding band in the box, but, regardless, it was a good listen. There is a certain satisfaction to be had upon hearing a metal band produce music which is true to the spirit of metal, and it is even more satisfying to hear them doing it well.