Emperor were a Norwegian black metal band at the very heart of the scene, however, they eluded my attention until relatively recently. However, I decided to listen to them properly for the first time recently, and I feel enlightened for doing so - seeing a whole new, and enjoyable, dimension of early second-wave black metal. 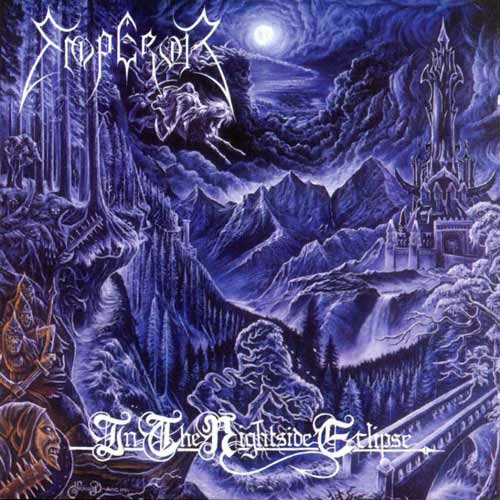 Along with bands like Enslaved, Emperor were among the first black metal bands to add synth and keyboard work to their sound. Enslaved, on one hand, took a viking-metal influenced approach. On the other hand, Emperor created a glacial, cold and epic sounding work, their black-metal fury and speed unhindered by the introduction of keyboards, which serve only to deepen the black-metal chill, albeit adding  a lot of memorability to the songs. The songs are very layered and complex, long before other bands on the scene were doing such things, and the production is very clean, unlike the raw sound of bands like Darkthrone. of course, the production values are far from polished, which is apt for the bands style. The balance within the band, in all aspects - production, sound, song-style, and the balance between beauty and aggression are all very apparent, and enjoyable to listen to. Emperor sound pleasingly well rounded in thier debut.

The technical ability of the musicians involved is also noticeable, and certainly higher than it was among many of the other  bands at the time, and this is carried forwards in the sheer power of the music. The vocals, especially, are very well executed, and extremely chilling, for instance, their sheer demonic intensity in "Towards the Pantheon" is marvelously impressive, and emphasises the core values of black metal - chilling and cold music. The combination of tight black-metal staple guitar and haunting keyboard really helps the band to produce this, and they do it on a par with any other band of the same style. Emperor were clearly a band thinking out-of-the-box at the time, singing songs about things other than misanthropy and Satan, diversifying the genre which they contributed to, and doing so with excellent style, which is reflected in the album itself - it has a little bit of everything; Fast, deadly black metal, but also slower, unbelievably epic sections, which the keyboards truly come into their own.


Of all the black-metal albums of the time, that being 1994, In The Nightside Eclipse seems particularly well formed and generally enjoyable from end-to-end. There isn't a second of filler, and each track is memorable in it's own right.