In all the time that I've paid attention to metal, just now seems to truly be the finest hour for the NWOBHM in a long while, perhaps even since the movement itself ended decades ago. While the revival and presence of new, often derivative bands has no doubt seeped into metal's general conciousness, the amount of respect that many members of the community who, like me, weren't even alive during the movement's heyday, are giving to the NWOBHM originals is heart-warming. The causality to Satan, one of the gems of the movement, reforming is uncertain; has it precipitated enthusiasm for the style, or has it fed from it, and gained strength that way? I, for one, cannot claim to know. What I can claim, however, is that there are comeback albums, and there are comeback albums. Life Sentence, as I am about to tell you at some length, is a mighty one indeed. 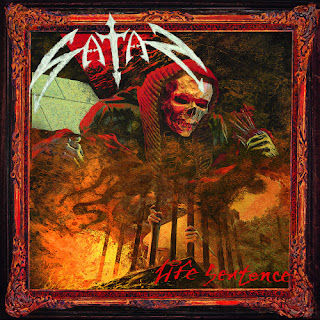 Look at that artwork. Look at it. Does that look like the artwork of a bad album? No sir, it does not. That's because Satan are a band who, even after decades, still know how to do things properly, and like the proverbial bowl of muesli at breakfast, great artwork is so often the start of a great record, and this one is no exception - there has been no flirtation with computer graphics or that font that everyone uses. Instead, it looks like it could have been released straight after "Court in the Act" - the band's 1983 début, and good lord if it doesn't sound that way too. There's almost a feeling of disbelief that it's been around 26 years since the band's last full length effort, and believe me, it doesn't sound like so much time has passed either: Despite splitting up and going about their separate endeavours for decades, Satan make Life Sentence every bit as wholesome as their previous work, and their musicianship hasn't aged a day in the time which has elapsed. The memorable and deeply distinct mid-range vocals haven't diminished in the slightest, and are as strong on this record as they were previously - they are, in fact, almost triumphantly consistent, still weaving memorable vocal hooks and choruses which are positively fantastic to sing along to and embrace as they come flying out of your speakers. Likewise undiminished, it must be stressed, are the other sections of the band; the drums remain as vigorous, the guitars posses the same hasty, soaring bite - all of this, it must be added, without having "that new guy" just shipped in from somewhere in any of the positions within the band, which furthers the impression that every member of the band cares about making music - there wasn't a single one of them who didn't feel like coming back, and indeed, all of them have, if you feel like checking out other bands they've been in, been damn busy in the meantime. In short, to create a more digestible comparison, this record is equivalent to Metallica entering the studio and creating Kill 'em All, down to the very idiosyncrasies, right now.

Don't, however, mistake Life Sentence as some kind of derivative clone of Court in the Act. To say such would be as unusual an interpretation of affairs as considering a record like Piece of Mind unexciting because it's a bit like Number of the Beast - which simply does not detract from either album. The same is true with this record in relation to Satan's back catalogue; it feels like the natural continuation of the bands legacy, and all the more precious, perhaps, for not tarnishing it in the slightest, which is among the most pleasing things about it - adding a real "feel-good" element to the band's return. In and of itself, however, the music is likewise greatly pleasing - still youthful and energetic, the album is composed of belters and memorable foot-stampers all the way through. There simply isn't a single throw-away track. The sound doesn't even feel dated - and while the NWOBHM did occupy a specific portion of our genre's history, Life Sentence does not, pardon the pun, feel imprisoned in the past - it is as good now as it would have been at any other time. In fact, I'd have enjoyed the album without having any knowledge of when it was released; someone could have told me it was made in 1985, and I'd have accepted that unquestioningly, but instead of sounding locked to that era, like some sort of throwback, the record sounds comfortable in 2013 in a way many bands could not manage - or would even try to avoid. Adding to this timelessness, the sound quality is unspoiled by technology. Perhaps a little more tidy than the previous work in terms of production, but not overtly more so - there loudness wars have passed this record by unscathed, leaving a remarkably solid and immensely enjoyable record to its own devices.


In today's metal community, indeed, music of any kind, we are often very spoilt when it comes to music; there are dozens of albums coming out on a weekly basis, and often, we try to absorb them all, but never truly appreciate any of them as a consequence. Because of this, I always feel especially connected to metal, and excited about listening to it, when something so good comes along that it pushes every other record to the sidelines for a few weeks. Nothing more really needs to be said other than that Life Sentence is one such record. It makes me damn proud to be into heavy metal.