Short of writing a review entirely in Elvish, which, alas, escapes my abilities, there's really no way to quite convey the things which Summoning do for black-metal - creating an instantly recognisable mixture of black-metal rawness and prominent, ever-present majesty. However, for over half a decade, things had been very quiet in the Summoning camp, until word began to spread through the metal fans of middle earth, whispers of an upcoming record. The fortress of Summoning was being rebuilt, and an album was on the way. That record was Old Mornings Dawn. 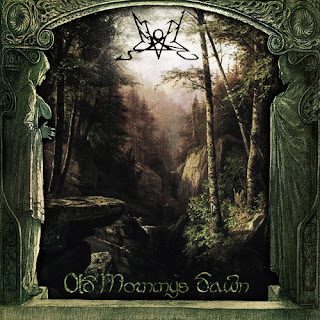 Old Mornings Dawn is the first Summoning record in around seven years, and perhaps owing not only to the highly respected standing of Summoning within black metal circles, but also to the long time the album has had in which to approach release, it has felt absolutely rapturously anticipated, with months worth of excitement and hype ensuing before its release this June. Fortunately, one of the reasons that Summoning are so respected is that they are a band who have never failed to deliver a great record, and after half-a-dozen listens, I can very confidently say that Old Mornings Dawn is every bit as good as the band's back-catalogue in terms of quality, something which, much to my pleasure, was suggested instantly when I first listened to the album. One of the most enjoyable qualities about Summoning's material is that it simply does not feel dated; this record, from 2013, doesn't sound markedly different at its core than a Summoning record from 1997; over fifteen years ago. All of the things which make Summoning what they are musically remain present in force on this record, as they always have been; the accustomed blaring, grandiose synth work, with particularly prevalent brass instruments, melded cleverly into pounding but tastefully programmed drums, and a thick, misty atmosphere all rush out of the record to greet the listener like an old friend. On the other hand, this isn't to say that Old Mornings Dawn is re-hashed or unexciting - more that it's consistent - something which many metal fans need to be reminded is possible without being synonymous with unexciting. In fact, Old Mornings Dawn, while comfortably familiar and unmistakably a Summoning album, is likewise slightly different in character from every other Summoning record, which is another thing the band do exceptionally well; while all of their albums share an essence, they express it in varying ways.

The way Old Mornings Dawn chooses to express itself is once again novel; whilst borrowing elements from both the bare-bones beauty and glorious swagger of records like Minas Morgul, and the thicker, heroic pomposity of Let Mortal Heroes Sing Your Fame, it likewise goes down a different path to either. Old Mornings Dawn feels like one of the most sombre and even sorrowful Summoning albums to date; and the songs evoke a long gone past, or heroic sacrifice, as opposed to glorious elation. This twist in the atmosphere is, nonetheless, in every way as beautiful as one might expect a Summoning album to be; the sorrow-laden melodies especially really taking their rightful place as highlights of the album. The synthesizers in this record likewise fit in the middle ground, with an intricacy which you wouldn't experience in the bands early work, but also the trademark feeling which the band always evoke; that a lot of their keyboard work could have originated from the dusty old keyboard in a teenagers bedroom, which has finally been plugged in and allowed to truly sing it's hypnotic and enchanting melodies. Accompanying the winding, gleaming keyboards, one of Summoning's more recent additions; the choral chants, make their presence felt in songs like Caradhras, where they step up the immersive, epic feel of the record; epic, that is, in the truest and least bastardised sense of the word. Of course, with the sheer thickness of Summoning's keyboard and vocal approach, it could be easy to forget that there are guitars at all, however, they are themselves used to great effect on the record. Raw and often quite overshadowed, certainly, but all the while providing bite, murkiness and depth, perhaps more so than on many of the band's previous works, with a truly rumbling, tangible tone - Old Mornings Dawn contains some of the most enjoyable guitar I've heard the band come up with.


It is, as always, a great pleasure to see such a long-established band carry on with the sort of quality that their fans have come to respect - which is something I can safely assert having listened to Old Mornings Dawn half-a-dozen times at least now. It doesn't feel like "the new one" or jarringly unusual after seven years, instead, and comfortingly, it feels like a very solid Summoning album which just happens to be new. The band have stayed true to their spirit, and it shows.