More or less everyone who has taken the couple of minutes necessary to listen to a sampling of their material will have something to say about Watain. That is, I strongly suspect, really the only thing which feels certain about how things that the band create will be received; everyone is going to have something to say about it, and if this time is anything like the bands previous works; nobody is going to agree with one another. Regardless, there had certainly been what felt like a long period of waiting with regard to the new Watain record; not so much unduly long, perhaps, but in my case, in my professed enthusiasm for the band, the wait was made to feel more lengthy by wondering what on earth the band would do next, after what felt like their magnum opus; Lawless Darkness. 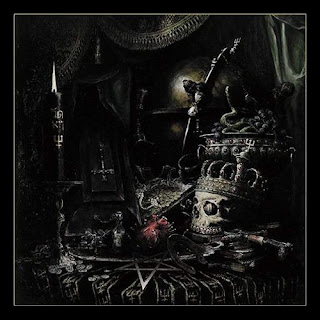 I usually stand by the right of everyone to listen to whatever music they want to for whatever reasons they desire. However, for some years now I've had the impression that a lot of the people who listen to Watain's music are subtly, or not-so-subtly missing the point. As far as I can tell, Watain is not meant to be the most grim, true band to walk the earth - perhaps to the dismay of many a sixteen-year-old who has just embarked upon black-metal, and thinks he's stumbled upon such. It is these sixteen-year-olds, moreover, who might be most disappointed by The Wild Hunt, with it's sprinkling of ballads, clean vocals, and rocking sections. Not, however, because they're the best measure of such things, but because they mistook Watain for a band who weren't going to do what they have done on the new album. The change in Watain's sound has always been gradual, and far from dramatic. Frankly, if you heard the swaggering, memorable riffs slowly becoming more so as albums passed by, and were taken by surprise by The Wild Hunt, then perhaps you're short-sighted. Therefore, I venture, the best way to enjoy Watain is not as one might enjoy the more "serious" black-metal bands. Instead, Watain should be savoured more in the way one might enjoy a band like Motorhead - it is, in fact, not unreasonable to suspect that you could probably listen to The Wild Hunt whilst on a motorbike, as opposed to in some snowy forest. When you listen to the band's back-catalogue, even the dark, rumbling beginnings which we glimpsed on "Rabid Death's Curse" still had a certain "stage-presence" even in their studio format. In a word, then, Watain has always been fun, and The Wild Hunt is no exception. Sure, some of the older albums have been much closer to archetypal black-metal than this one, but nonetheless, like using a teaspoon to do an adequate job of opening a bottle, that's never really what Watain were for.

In terms of content, The Wild Hunt is a motley assortment of influences. Tracks like "De Profundis" sound extremely primal and bestial; remeniscent more, perhaps of Blasphemy and metal of that sort, as opposed to traditional second-wave black-metal. On the other hand, tracks like "All That May Bleed" and "Sleepless Evil" sound far more like the "classic" Watain sound, with swaggering riffs which are given plenty of room to breathe -  thrashy in character, and at times quite rock n' roll, but with viciously sharp and haunting melodic elements highlighting the edges in places. These melodic elements have been stripped back, and if anything, for all of the claims that the band have diluted their sound, they seem more to have distilled it - Ballads aside, The Wild Hunt sounds a lot more akin to the bands first two records than the more recent two. Slotted in between the consistent material come the "ballads"; the title track, and "They Rode On", which, for what they have in common, are likewise very different. The former is very Bathory, with uncannily similar vocals towards the end, and a general atmosphere which fits very neatly in the same drawer on the great metal desk as tracks like "A Fine Day to Die" from Blood Fire Death. Having been told time and time again, both by reviews of Watain's work, and by peers, that Watain sounded like Bathory, this is perhaps the first time that this has actually felt true, and actually feels very rewarding to listen to; the softer sound bringing a lot of passion and beauty to what, otherwise, might have been an underwhelming record. It's not to say that the harsh, conventional tracks are bad, but the ballads help to balance the scales well and give the album enough identity to be more than just a footnote to "Lawless Darkness". Indeed, I'm also a fan of "They Rode On"; an even softer ballad than the title-track, and one which very much sounds like a black-metal version of November Rain - complete with a solo-based crescendo. It doesn't matter on the medium, in such instances - an epic solo is an epic solo, and to their credit, Watain managed to cram in more than a few; Indeed, the curious thing is that Watain do a good job of making the tracks work very well on the record; instead of being jarring, they instead fit into the flow of the album.


When I want to feel kvlt, I'll throw on A Blaze in the Northern Sky or Ultima Thulle. If, however, I want to listen to something memorable, charmingly esoteric, and most of all, something fun, I'll listen to some Watain. The Wild Hunt is no exception, and the band have carried on at full steam ahead; it's still consistent, very much solid, and even inventive; to their credit, Watain's recipe is distinct, unique, and perhaps to everyone's displeasure, seems to sell well. Even the ballads, however, feel fitting with the path Watain walk. Most importantly, however, the level of quality is definitely sufficient to reassure everyone that, like them or not, Watain still give a fuck.