Ostensibly, the black metal of the United States just isn't on a par with that of Europe, and, insofar as I listen to more black-metal from Europe than not, I suppose there is, superficially, reason to suspect that this might be true. It's certainly true that relatively few of the founding, genre-defining bands came from the States, but nonetheless, when you delve a little deeper - if you're motivated enough to be more than the casual metal fan, there is plenty to enjoy. An extremely strong rebuttal of any blanket statements to belittle US-black-metal comes in the form of Cobalt - perhaps one of the most interesting and trailblazing black-metal bands of recent times. 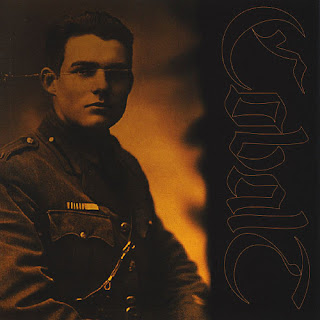 Gin, released in 2009, is Cobalt's third full length album, and any review I hope to write about it should probably begin by noting that it's a very interesting album indeed. The reasons for this are many, which perhaps makes it much harder to discuss it in few words. Suffice to say, the record has a lot going on in it - without question, in fact, several things at once. Whilst at times being conventionally ferocious, the music is also twisted, as well as unusual and deeply narcotic - the lyrics being shrieked are every bit as ominous as their musical retinue, and every bit as varied, cryptic and at times eerily evocative for reasons it's at times hard to pinpoint. The crushing but razor-sharp guitar tone dances almost drunkenly around the unconventional, at times almost martial sounding drum work. Drunken, perhaps, is not the right word to use - the album more matches the feeling of something - I know not what - mind altering, happening to you; the wall, as you stare at it, suddenly becomes the ceiling, whilst you flinch in fear that the paintings and objects at that side of the room will suddenly fall onto you. Almost every track on the record, while at times beautiful, also exudes a creeping, oozing and undulating strangeness, to the extent that the whole album can be considered solidly disconcerting, and at times genuinely fucked-up, which I can only imagine its creators were aiming for. It's very safe to say that they succeeded utterly in that task, whilst also creating something profoundly deep; nothing about the record, however baffling it may initially seem, is arbitrary. Everything within it is steeped with meaning, including the bits I can't even begin to understand yet.

Further demonstrating that black metal from the US can be great, Gin is also an album which is a shining example of that nation's musicians taking black-metal and truly making it their own, instead of trying to capture the snowy spirit of the Norwegian winter, or some other European scene. Gin feels absolutely American; lyrically, and indeed musically - there's something in the twisting, pulsating guitar work which simply does not sound European, and indeed, while the whole album sounds disconcerting, there's something of a spirit of Americana about it, above and beyond that. This recipe is one which few other bands that I know of have so much as attempted, let along pulled off with the success which Cobalt have, and the band's uniqueness is certainly held high on this particular shield of style. It is, however, oversimplifying my account of the band, and this particular album, by describing it as having merely one style - in truth, the album is chimerical and many-faced; no two songs are alike, and despite carrying the same dark strand of essence through its running time, it is carried through diverse, and frequently nightmarish landscapes indeed. Bending, lurching riffs send you reeling in a trance, unsure of what direction "up" has transformed into, whilst others convey the feeling of the painful and anxious re-alignment of the senses after such a intense and malign experience, but all the while remaining equally harsh, manic and bold, and at it's most powerful, the album drowns you in it's twisted passageways, before leaving you to float in dark, murky water, as the album fades into the clanking of shackles, the sound of whips, a slave work-song, and the lingering feeling that you're going to want, nay, have to listen to it again to fully understand what just happened to you.


Cobalt, I knew, were one of those bands I was going to have to listen to some day, based on word of mouth alone. As it turns out, I can certainly consider my sources reliable. Gin might be, depending on how many more albums I listen to for the first time this month, either one of or the new discovery of the month for me, and I very much look forward to exploring the bands other output, both past, and, when the time comes, upcoming.