In recent weeks, I feel like I might have been neglecting the more old-school, traditional forms of metal slightly. To balance things out - like a well thought-out sandwich - it's time to add some relish; and what better thing to balance out the harsh, spicey black-metal filling of late than a garnish of Cirith Ungol; cult classic and unrepentantly badass American heavy metal. The band have been recommended to me countless times, and I've often told myself that I really need to set a day aside to delve into their work. Fortunately, it's much too rainy outside today to mow the grass, so instead, metal is the order of the day. In particular, I've decided to take a listen to the bands second album - 1984's "King of the Dead". 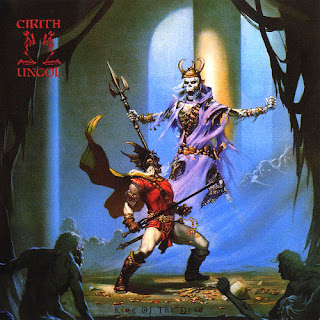 I could write this review in mere sentences, with great ease; it would read "Cirith Ungol do all of the things which metal is supposed to do". Some elaboration, however, is in order, for several reasons; not least that I really do try not to be too shit at writing reviews, and secondly "what is it about them in particular?" I hear my tiny readership cry - or rather, make no noise at all, as the readership - a spider who lives on my windowsill  and listens to a lot of metal whether it likes it or not - is as it happens, a creature of few words. The fabulous artwork of King of the Dead - a Michel Whelan illustration from "The Bane of the Black Sword" - sums up many of the points I'm about to make, that is, that some of the best metal you'll ever hear is concerned with things which are simply over-the-top in terms of appealing to everyone's inner twelve-year-old: High-fantasy, swords, shields and loud guitars - and that, my friends, is what Cirith Ungol exudes. Stylistically, the band are about as old-school as you can get, blending the doom feel of Black Sabbath with the more aggressive, sharp edge which really began to gain momentum in the eighties. For every warm, shimmering, reverberating riff in the vein of 'Sabbath, there is also, often as not, one in the more rapid-fire style of bands like Manilla Road, who are among the most similar bands I've listened to previously. The guitar tone on King of the Dead certainly seems to mark a middle-ground between the harsher and more mellow aspects of heavy metal - retaining a rock 'n roll feel, whilst easily dealing out enough punch to keep it up there in terms of heaviness with the goings on among the NWOBHM across the pond.

This melding of older rock n' roll with a more eighties metal sound seems very much to be the most prominent features of the record, and very much inspires a feeling of getting the best of both worlds. The elaborate and extensive use of guitar solos, and the cruising, rolling song structure gifts the music with a memorable, dare I say catchy quality, while at the same time, the riffs are rough around the edges and the guitar tone can really kick some ass - giving it an equal measure of metallic energy and indeed, at times an explosive level of electrifying momentum. One attribute of the record which doesn't really play for either team, but instead sits squarely in the middle are the vocals - shrill, slightly creepy screeched vocals which are, to my taste, exactly how traditional metal vocals should be; rough, passionate and with a tangible but playful evil - the sort of vocals, in short, which probably alarmed people's parents, and, as Lemmy from Motörhead remarks, that's the mark of good rock n' roll; it's loud, and their parents don't like it. Whilst listening to the record a few times on YouTube, I've noticed a number of people complaining about the vocals, and my conclusion on the matter is that said people don't know what's good for them. Like petulant children who won't eat their broccoli, some people are very quick to remind you why they don't deserve to enjoy metal this good. I wouldn't try to tell anyone that this is objectively something they should enjoy, of course, but nonetheless, such people are decidedly silly. I digress. Cirith Ungol, in essence, typified many of the qualities which I love traditional metal to exhibit; managing to be at the same time filled with attitude and atmosphere in equal measure, not switching out one for the other, and all the while being loud, ballsy and deeply memorable.


Ultimately, Cirith Ungol reminds me of something I've often remarked; Heavy metal is the music which you know is cool when you're a child, but only the chosen few remember this to adulthood. Bands like Cirith Ungol were, before I knew what heavy metal actually was, always what I imagined, perhaps even hoped, it was like. This is the way heavy metal should sound, and this review is for that chosen few.