At the steady and admirable rate of one or two albums per year, one man doom-vendor Judd Madden has been releasing albums for a while now, and caught my attention when I was browsing through Bandcamp a few years ago. A couple of weeks ago, it came to my attention that a new album had been released, this time entitled "Glacial". Given that I've reviewed a number of Judd Madden's releases now, there certainly seems no reason not to review this one too, on top of listening to it. 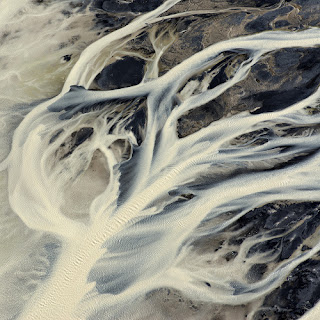 I have often remarked that doom metal, especially in its slower varieties, sounds very geological. With this album that is precisely what it is about, too. Glacial is, as you might have guessed, especially if your familiar with Judd Madden's work, another album which deals with nature, and, more specifically, water. With the exception of a few records, Judd Madden's back catalogue consists mainly of explorations of water; the oceans, the water cycle, and even water's absence - the last album, "Artesian" being focused on Drought. This has very much grown not only into a trademark style, but also into something I often eagerly await. Like water itself, it's very refreshing to have a crushing, atmospheric doom record which isn't simply an exposition of being very very high, or similar well trodden paths of the genre, and lets not deny their trodden indeed. Glacial remains very conceptually substantial, and continues to prove that Judd Madden is exceptionally good at making his music evoke things; Every moment of the records simpy sounds glacial; the drone-like, super-low tempo sections crush and tear the bedrock, as they make their slow journey downhill, scraping away at the hillsides, while the guitar tone is allowed to grumble and buckle like the creaking, living ice as it flows. The atmosphere on this record feels the thickest yet, with a truly monstrous lower end, but likewise a level of depth and clarity in the mix which allows moments of atmosphere to shine through with ease, particularly the lead-guitar work, which never fails to evoke cold, panoramic, sweeping notions of great glaciers at work.

Glacial, in it's onset at least, is probably the Slowest, and possibly also the most crushing, record that Judd Madden has ever created. The opening track evokes the creeping, near indescribable slowness of a glacier well, with beauty and immense grandeur mixed with gritty sustain and droning feedback, embracing and musically hailing the magnitude of the phenomena the album describes; the sustain and feedback adopting the role of the creaking, groaning ice. This, perhaps, really showcases how much of a story many of Judd Madden's records tell despite being instrumental; we are fed the music of Glacial, and we are suggested what the concept is; the rest of the story we tell to ourselves, but the musician ensures that the music and concept, yet again, fit together like a hand and glove. Further adding to the instrumental narrative, Judd Madden has always done a great job of creating albums which build and develop throughout their running time, and this one is no exception; the slow rumbling of the opening track turning into a brisk, almost hasty riff by the middle of Mountain Slayer, evoking, perhaps, the glaciers march towards the sea, much in the same way that "Waterfall" used escalating levels of heaviness to evoke the rivers journey towards the ocean, and, like that album, Glacial also feels very complete and cyclical - the final track, both in name and nature, one of rebirth and new-beginnings, as the cycle of music, and the cycle of rock and ice carry ever on. Sometimes, the stories which are the most fascinating are the ones which are told in no words - and this is another of those stories.


So, to conclude, once again, the new Judd Madden album proves to be just as enjoyable as they have been - very consistently now - for a couple of years. While almost every Judd Madden record has a slew of similarities and consistencies, every one also sees the music explore new dimensions, and this one is no exception; it's fresh and dynamic, but also reassuringly consistent, and very absorbing to listen to. I'm already interested to see where the next one will go.