Judging by two things, firstly the fact that I meant to review this album soon after it come out, and secondly, the fact that Discontinuities came out in March, It would appear that I've failed in this. However, now, finally, I've gotten around to listening to the bizarre and at times unnerving mixture of black-metal and alarming music-theory which is manifest in every release that one-man black metal project Jute Gyte has to it's name. And now, onwards, reviewing what I thoroughly expect to be another winding, vertigo-inducing journey through music which feels gloriously close to the sonically impossible. 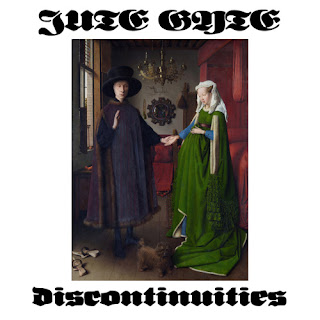 I don't know a great amount about the man behind the Jute Gyte moniker, Adam Kalmbach, but I can only assume he's probably a wizard. Jute Gyte records are not so much composed as invoked, summoned and crafted. As with most of the project's releases, Discontinuities gives the impression of having been created by someone who read ancient, eldritch tomes of musical lore, in languages and alphabets long forgotten, and created strange things which had not been dreamed of before. Each grinding, churning track seems so discordant and yet so successful at what it does that the mind boggles within seconds of pressing the play button. The music collides with the ears as if it were spawned by some haunted, perhaps slightly broken-down carousel, or bizarre clockwork puppet-show, with banging hammers and screeching cogs. The clattering, almost percussive guitar tone is like being squeezed not just by the undulating, labyrinthine sound-waves, but by the laws of reality themselves closing in around you like a disturbing audible cocoon, a Blut Aus Nord or Deathspell Omega which was given strong drugs to produce delirium, and then wrecked it's room in solipsistic rage. Perhaps the image I'm trying to spin of how Discontinuities sounds is leaving it undesirable to listen to, but that is the unexpected thing to the first-time listener; what on paper might be a very, very challenging listen indeed is in fact rather enjoyable when you get used to it, even when, without a doubt, there is quite a lot of getting used to it to do. When you do, however, you can appreciate the works of Jute Gyte for the fresh and unique properties they have, and, perhaps more superficially, but nonetheless a source of great enjoyment, the sheer ability it always has sonically maul you with oddity.

Discontinuities, as the name might suggest, is actually a step away from the sound Jute Gyte had on the previous couple of records, although, for reasons I'm about to delve into, I can't fully describe these differences without simply telling you to listen to the music yourselves. As I reiterate every single time I review a Jute Gyte album, I know almost nothing about music-theory; however, even I can tell that Discontinuities is different, both in terms of it's overall essence, and in some more overt sections which previously lacked quite the same emphasis which they receive here. Namely, the record feels slightly more subtle, and the sound isn't quite so thick in places, with thin, high-pitched guitar meeting drums, with other elements at times seeming respectfully subdued, instead of the roaring and constant "in your face assault" of many of the previous works. That's not to say that the record is a tamed-creature, but it certainly, and effectively, flirts with more calm, but equally twisted, sections throughout. The track "Night is the Collaborator of Torturers" is a good example of this, combining an extremely high tempo side, with another, slower aspect - at times the tempo slows right down and saunters, something which creates an interesting lull in the storm, but at the same time doesn't quite heal any of the tears and lesions that the sound has made in your understanding of the laws of music. The soundscape doesn't become any more polite to the senses; even at a low tempo, the record is still without a doubt an aquired taste, however, on which, when aquired, tastes good indeed, and easily as good as the past records.


Once again, albeit slightly late to the party, I can give my verdict on the "new" Jute Gyte album. Discontinuities has every bit of the tangled, alarming energy and presence of the previous records, and definitely lives up to the reputation which Jute Gyte has slowly but surely amassed. Of course, like everything that came before it, it's not easy to listen to, but it's rewarding when you're willing to put in the time and effort, which I strongly recommend you do.