The bright pink thing I see before me is Sunbather by Deafheaven, an album which I'm told has very much taken the underground, and beyond, by storm. At a few recommendations by people I know, and a rapturous hubbub around the metal community in general, I've decided it's about time I gave the record a listen and see what the fuss is about. Whilst I'd be truly shocked if it was a conventional black metal record, besides that, I really don't know what to expect, and that, dear friends, can make the listening all the more interesting. 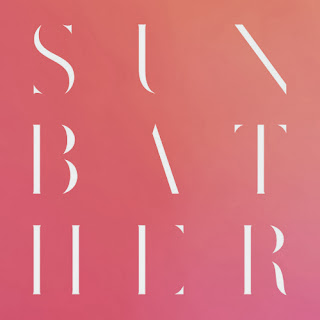 I'm told a lot of this record is in a major-key, and perhaps my mind was too eager to conflate that with meaning that it was "cheerful". For the most part, however, Sunbather is not an album for happily running around in slow motion with a smile on your face, as, perhaps, I set myself up for. The atmosphere is still lovely, and at times very uplifting indeed, I must add, but not joyous for the most part, instead, it is perhaps best summarised as curious. At many moments through the course of the record, I'm not sure what to feel; there are flashed glimpses of both bitter-sweet joy and elating sorrow, but always snatched by my ears from the sonic abyss, as opposed to lain obvious on the table before me. That isn't to say that the album feels like it's meant to be one or the other of these two atmospheric poles, however - no - I think that perhaps the ambiguity adds further to the music's mystique. Where the rolling waves of scathing, blasting and beautiful black-metal crash into the serene moments in the eye of the storm, upon the shore, the record sounds right, not wrong. The atmosphere which is conjured sounds sublime, sensual and almost luxuriant, which is a quality I've always kept my eye on the USA's black-metal output for, as it appears to be something which that scene in particular crafts well - that is - black metal which makes your ears happy. Maybe it's me conflating the pinkness of the album artwork with some delightful iced-cake, or maybe it's the peculiar and exotic sweetness of the music, but the record certainly exudes an aura of peace, even during it's more intense sections, which I very much suspect the musicians in the band were aiming for. The record feels like a genuine treat - something you give to yourself after a hard day.

The atmosphere, as my previous paragraph may have suggested, is probably the most salient feature of the record, and certainly, it represents the rolling pink mist which absorbs the listener within seconds. Don't get the impression that the music itself isn't interesting though - in philosophy, there is a principle called supervenience; properties of a high level, in order to change, can only do so in light of there also being changes on a lower level to which they are tied. In the case of Sunbather, the superb atmosphere on one level supervenes on equally solid composition and musicianship on another, with raw but full production allowing the record to shimmer, while also guarding it from sterility - you could not have such atmosphere without very solid music to create it.  The musical engines powering what is, without a doubt, a predominantly atmosphere-based record, are formidable indeed;  intense sections are very well executed, and don't lose any of their glory for the at times impressive tempo and ferocity - the atmosphere which sustains throughout the album manages not to break up on re-entry one bit. Likewise, like the ebb and flow of tides, the slow sections give the listener a moment to sit back and take in the benign barrage which has been incoming - some are blissful, others unsettling; the eerie reverberations and preachings of "Windows" or the vicious feedback in "Please Remember" certainly serve a purpose, and perhaps the latter has a very appropriate name indeed; This is still a black metal record; please remember not to get too comfortable, no matter how nice the view. In a way, this is another enjoyable quality of the album; it doesn't wallow too helplessly in warmth, or fall victim to pretentiousness - it is, instead, a deeply unusual black metal record, but a truly black metal record nonetheless.


As yet another album is added to the "that was worth listening to" pile, it's definitely worth taking a second to think about how diverse black-metal has become over the years. I've never heard an album quite like this before, but at the same time, it feels hewn from the same material as so many black-metal albums - fresh, but reassuringly tangible; written in a language that anyone should be able to speak after a few black-metal records. The words of this language, on this occasion, write poetry.