I hadn't ever thought of exploring Lifelover's music until well after the band had ended - indeed, I only first listened to their work a few weeks ago when someone recommended I do so immediately. Upon listening to this very album - Erotik, I realised that I'd stumbled upon something both profoundly sorrowful and depressive, but also something unbelievably beautiful. While I have yet to listen to the rest of the band's work, I can safely say I shall do my best to find some words to tell of what meets the listener when this album passes by. 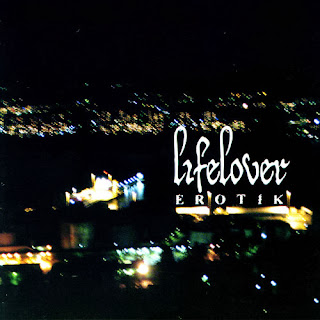 On the whole, I'm not a huge fan of album covers which are simply photographs, unless they work extremely well. In the case of this album, however, the artwork depicts the albums feel perfectly - it shows the world, illuminated but blurred, as it might appear through a tear drop in your eye. It's dark, utterly urban, and most fitting of all, paints a picture of sorrow and darkness; perhaps not exclusively depression, as Lifelover were a much more diverse band than that lyrically, but nonetheless the artwork conducts the personal, introverted darkness which the bands music curls around - the record is not going to have happy songs to any extent, and it makes that deadly clear from the very beginning. Musically too, the record is quite a diverse one, both in the story that it's music tells, and the way in which it tells it. Stylistically, it smoothly blends a very rock orientated edge with the harsher beast of depressive, melancholic black-metal, and a dash of other things too, in varying quantity, most frequently punctuated by spoken word and melancholic keys. While I don't understand the spoken word or samples, as I'm one of those bastards who only speaks English, the feeling which they carry has reached out of the album completely intact, and weave a picture of sardonic, tragic and bitter darkness and at times deeply crushing sorrow. This sorrow is largely delivered in two mediums; the softer side of the record exudes helplessness and lethargic turmoil, while the more intense, black-metal influenced material spews forth self-destructive, scathing and hateful wrath and aggressive, tense, and at times decidedly fucked-up sorrow. It's always worth bearing in mind when listening to proper depressive music like this, that the people who made it aren't filled with angst, but often genuinely come from a very dark place, and in this record, that is very tangible.

The great juxtaposition of the record is how the act of listening to it occurs; at times it feels a very, very challenging record to listen to, and one which demands all of my attention and more, whilst at other times, it feels very smooth and sonically-edible - the music bends along it's course from malevolent to benevolent - without fail unpredictably, but always loaded with the nature of, fundamentally, being a very rewarding listen. The album certainly has the ability to pluck you from where you sit and transport you into... well, not a place exactly, but the music takes you away. The maze of rough, at times almost discordant guitar work seeps through you, and it's rough beauty mixes with its unpolished edges to create an atmosphere which genuinely feels a little bit oppressive, but at the same time almost serene; very very truly conveying the sort of feelings and atmosphere which the records creators were aiming for, I'm sure. The production values of the record, as I've established, compliment this atmosphere superbly, with the rough-edges very much adding to, as opposed to subtracting from, the sound - much like, for instance, the roughest work of bands like Burzum, Lifelover carry a fascinating tone which is seldom replicated - the nuanced, rough and at times precariously produced guitar work certainly gives the music it's static-laced tendrils, which drag the listener away into the soundscape, especially during the moments of thickly laid guitar, which feel akin to swimming in dark, mood-filled honey, before being plunged into an ambient section, gasping for air.


Ultimately, I found Erotik very hard to review - perhaps one of the hardest records in the last hundred or so, just for the sheer loss of words at how to describe what it is. I'd always recommend listening to the things I review yourselves, but I do so especially much in this instance. At the same time as being difficult, however, there are few records which have felt quite as rewarding and exciting to listen to; let this review mark the fact I've discovered something new, and something very, very beautiful, something which ended before its time. Rest in Peace B.