#301 Avenged Sevenfold - Hail to the King

If there's anything I want to embrace more in the upcoming reviews I do, it's this; to delve more deeply into albums I might not enjoy - to explore things which I probably won't listen to again, instead of simply reviewing the albums which I've procured for my own enjoyment. This review should certainly usher in this trend; I've been vaguely aware of Avenged Sevenfold having made an album which is actually more or less metal, and have heard very mixed things - Robb Flynn, of all people, has slated it as derivative, and while I'm sure we could indulge in proverbs about black items of kitchenware swearing at one another, I still feel the need to investigate the record, on account of this recent strife in the back-of-the-schoolbus genre. 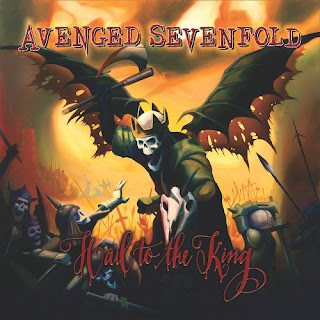 As they say, when I were a lad, Avenged Sevenfold were one of the good metalcore bands; fun, catchy, and decidedly less noxiously contrived and manufactured than bands like Bullet for my Valentine or the their similarly teeny-bopping brethren. However, I'm nearly twenty now, and while their early work elicits a cheerful nostalgia, this new output might not be so lucky, especially when my inner metal elitist evolves spontaneously into a squirming, wrathful dragon at the band's soapbox of self proclaimed "metal" which they probably decided upon in a meeting. "We are honored that our fans have once again put heavy metal at its rightful spot of #1." Well gentlemen, as often as you post that status when your album reaches the top of the charts in many countries, the fact is that there something very condescending about it; Avenged Sevenfold suddenly not only consider themselves metal, but also think they're doing something to help it - the band scream "metal is back" from the rooftops when had they only known, it never left in the first place. Granted, Hail to the King is, as far as most need be concerned, a metal album of sorts, I can't help but feel that this boast invalidates and condescends the work over the years of the underground bands who really care - who kept the flame of heavy metal lit, and burning brightly, spending more than they earned, and losing more than they gained. Gentlemen, your album isn't saving metal - it's not a great revival or a revolution, and in fact, there's little to be proud of before; the album is at number one for one reason - the band who made it are Avenged Sevenfold. If that hadn't been the case... who knows, but the album certainly feeds off it's creators, as opposed to standing alone. But enough irrelavent spewing about the details - the real question is how the record shapes up musically, as opposed to how annoyed I can allow it to make me within it's fifty minute run-time.

The immediate answer to that question is... well... it could be worse. It could be a hell of a lot better too, but in all honesty, it's nothing offensive. As I said in my review of Megadeth's Super Collider, being inoffensive is, of itself, a flaw - the album doesn't have the energy and punch which equipped their earlier works, instead swapping it for ponderous and derivative groove. Derivative you say? Why yes indeed - almost every song sounds subtly, and sometimes not so subtly like other songs which other bands have done - a pile of its influences, immiscible and bare to see, as opposed to concocted into a sound. What separates this from the thrash-revival or traditional metal revival however, is that Avenged Sevenfold happen to have borrowed extensively from albums which I didn't like very much in the first place, which, above all things, is probably the real issue for me as a reviewer. Hail to the King is a mish-mash of mid-era Metallica, mid-era Megadeth, and generally the watered down metal of the mid nineties; in other words, decidedly unadventurous. The album seldom escapes the mid-tempo, and doesn't have many moments in which it "shines" especially - in the end, it sounds a bit worn out. Perhaps a worn out instance of what could be a nicely made object, but worn out nonetheless. It's not for me to ponder how deliberate the stylistic choices on the record were; were Avenged Sevenfold referencing the metal which they themselves greatly enjoyed, or are they creating a special formula blend, to be suckled upon by the fan-base. Either way, the result is similar; I don't really care for it particularly. The band were always among the best of their craft back in the day, and sure, that still shows through - the song-writing isn't overtly bad - in fact, a lot of it is catchy enough to sneak into my brain with relative ease, and remain there until I listen to something else, but I'm never one to consider that a selling-point in and of itself, and through the course of the record, Avenged Sevenfold did not sell it to me very much at all. Fortunately for them, they seem to have sold plenty of it already.


So there we go - my usual disclaimer for records I didn't particularly enjoy, as ever, stands; if it is your kind of thing, then so be it, and who am I to judge. However, my view must be laid on the table, such is my position as a reviewer, and I for one don't particularly enjoy when I hear. Fortunately perhaps for me, however, I didn't really expect to - there's a reason that bands like Avenged Sevenfold lie on the peripheral of my attention, and it's probably just cruel of me to drag them to the centre of my focus for a time, however, variety, as they say, is the spice of life.

This is a 4/10. It might seem drastic, but I really need to start quantifying those lower numbers.