There's a good chance that - these days at least - most of the people who discover Carnivore do so as "the band Peter Steele was in before Type O Negative", and certainly, while I heard a few carnivore tracks very early into discovering metal at all, it wasn't until the band was framed in my mind as just that that I got around to listening to them properly recently, when, while browsing through a second hand record store, I happened upon the self-titled LP. Based on the good things I'd heard about the record, I decided to buy it blind, and I'm glad I did. Firstly, it turned out to be a first-pressing, which is always nice; It's cool to know that the record is older than I am. However, and more importantly, it turned out to be musically excellent. And without further ado, I'm going to review it. 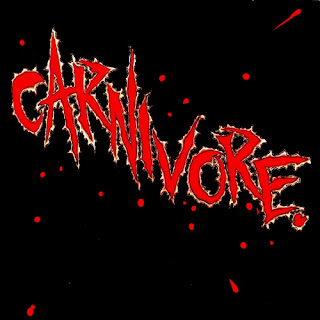 There are many ways to describe Carnivore's début, but the one I find most suitable at this moment is to consider it something, somewhere between Kiss playing thrash, and Venom covering Kiss songs. The whole album is rip-roaring, primitive and primal, with no-nonsense songs in which the riffs and pounding rhythms don't give an inch more than the song requires. Carnivore's material doesn't know the meaning of the word "superfluous". The tracks have as much as they need, and not an ounce more, leaving the music quite lean, but also packing a lot of very straight-forward and memorable punch. The cruising riffs are lithe and tight, with the song-writing direction amalgamated eclectically from Peter Steele's diverse range of musical influences. The sheer variety of styles in play on the record certainly have the effect of  creating an album which thrashes, rocks, rolls and even occasionally segues through a few doom-riffs to make sure you're still paying attention, all under the tongue-in-cheek mantle of post-apocalyptic lunacy, and generally spawned-from-the-crotch heavy metal goodness. It's not quite thrash, but it's not quite anything else either; Speed metal's parents were warning it to stay away, and it's definitely not quite hardcore, either. In fact, the only way to really describe it well is simply to call it Carnivore.  Indeed, "carnivorous" is probably a good way to describe the album's sound, and the whole record sounds a little bit crazed, bloodthirsty, and over-the-top, in the best possible way. The vocals in particular, just aren't the sort of thing which most bands could get away with without it being a bit odd; thickly layered, viciously stuffed with reverb, and generally enhanced to the point of being demonic, on top of Steele already sounding ferocious, the snarling, raging vocals on the record manage to work extremely well for the sound which the band conjures, as opposed to sounding, well... unusual or out of place.

To tell the truth, I enjoyed Carnivore's work considerably more than I had expected to before experiencing the band - always a bonus when buying music blindly, or indeed listening to it for the first time in any way. The problem, however, is that I really can't remember what I was expecting before I took a listen with the purposes of explaining what took me so long. Carnivore is one of those albums which, by the end of the first track, you really can't remember anything specific about what you expected it to sound like - the brute facts of sound instead push your projections out of your head and make themselves felt. Certainly a reminder that there are no bands worth ignoring based on expectations of any kind, especially one such as this, which, to my ear, is fairly delicious. There are a few things I disproportionately love in thrash, and in metal of any likeness to thrash at all, and many of them are present in the record; memorable without being gratuitously technical is of course one, and I've already covered that; in fact, in more or less every review I do of material which isn't technical, I mention it. Secondly, the straight-forward riffs are extremely enjoyable - punk influenced, balls-to-the-wall neck-mangling riffs which rush along with a subtle, but not overbearing, sense of the haphazard; There's something wonderful about hearing a band who are really pushing it in terms of musical cohesion as their material rushes past; the drums suggest a little sweat on the brow - a little franticness - you can almost feel a tangible air of ever musician hoping not to drop their pick or sticks. There's something wonderfully organic about that, and perhaps that's the bottom line with this record in terms of summarising it; It's one of the most organic thrash records I've had the pleasure of hearing in quite a while.

I'm not sure how much it can be considered a "blind" purchase when I'm already a huge fan of Type O Negative, but whatever it is, it was a good purchasing decision, and one which I'm glad of; finally, a band I should have discovered a long time ago has actually entered my regular listening. But how many other bands like this are out there? For every band you discover, there'll always be seven that you'll later wish you'd discovered. In a way, that's one of the best things about metal.