I was reminded a few days ago, and quite rightly, that I haven't done a "That's not Metal!" feature in quite a while. The obvious thing to do, of course, is to take steps to fix this great omission of late, and so here we are. "That's not Metal!" can, of course, in many metal-circles, be somewhat pejorative, but as much as this feature sometimes give me the opportunity to review something of poor quality, it likewise gives me the chance to review something exceptionally enjoyable which doesn't quite fit under the metal banner. As an acoustic record, A Grave is a Grim Horse, by Steve Von Till, is one of those albums. 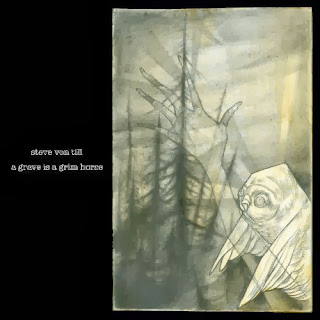 Steve Von Till is perhaps most widely known for his work in Neurosis, but I initially found out about his work on the side, and moved on to Neurosis after that. A Grave is a Grim Horse, one of his solo-efforts, is a record which I've been listening to a lot of late; perhaps more than any single metal record in my collection, and there's good reason for this; sometimes, you just need something different, and an album such as this is a fantastic messenger of such difference. From start to finish, the album is a dark, brooding and beautiful acoustic journey, both mellow and surprisingly intense for what it is. With music which is a little bit less dynamic - music which takes a step back from the edge, you always get the feeling that the mood oozes from every not that little bit more sweetly, and here, just about every track, though diverse in mood and tone, are utterly steeped in atmosphere; tracks like "The Spider Song" and "Willow Tree" stand out to me especially for their poignant delivery of emotion and beauty - albeit the best of a damn good selection - I don't think there's a single track which could be taken out of the mix. The rich, echoing guitar tone and abundance of soft, weeping slide-guitar perfectly enriches its instrument's slow, steady story-telling, where notes are dropped gently into the music, cradled tenderly and then let go. The subtle additions of synth definitely contribute also to raising the record to the level of an atmospheric journey. A journey, might I add, through various moods; sorrowful, wistful and at times a little more upbeat, but at the same time bitter-sweet and subdued - not music of celebration, but of contemplation.

The album stands, perhaps, as a rejection of gratuitous musicianship, and instead truly showcases what can be done with a few elements mixed, tastefully and with what must be an excellent ear for the atmosphere and subtlety - the songs have the feel of songs which could be played on nothing but a guitar, perhaps whilst sat in the shade, and not lose much of their shine. It is this subtlety perhaps, which truly describes the atmosphere on the record - earth-bound, but extremely deep,  profound, and moving. The simple guitar and vocals approach certainly doesn't weave songs which are energetic per se, but the slow, winding music is perhaps the most relaxing music I've listened to in a long time, albeit without simultaneously being too much. The crooning vocals may lull and relax the listener, but at the same time, they don't go so far as to ruin everything by giving you a mug of hot-chocolate and telling you everything is going to be fine; in fact, a lot of the record is dark - even unsettling. All of it, however, is laced with a sort of fatalistic feel; the final track, "Gravity" is almost dirge like, and has the lyric "What's done is done" - in those four words, Steve Von Till himself explains the wistful atmosphere of the record far better than I have attempted to in several paragraphs. It is a record of songs to sooth you after misfortune has happened, not songs to wallow in during the misfortune, and in that recipe, the album encapsulates both darkness, and light. It is, perhaps, hopeful, it its own way. It's the sort of album which walks up the hill, and down the other side, and as far as I'm concerned, they're among the best kind of albums.


For a long time, I went through a phase of my favourite albums for the most part only being metal ones - it is indescribably refreshing when something like this comes along and shakes things up a little. Spawned from the metal scene though it is, I can certainly listen to it and remark "That's not metal!"... and it sounds damn good.