I've been aware of Toxic Holocaust for slightly longer than I've been able to consider myself a fan, but like most bands who slowly creep into your listening, it was, in the end, a very rewarding process. One of the first things I'm always ready to assert about the band is that Toxic Holocaust are not quite the same branch of the tree as the thrash-revival which has coincided the band's life-span so far. Toxic Holocaust have always been something a bit different - and now it's time to investigate whether the bands new record "Chemistry of Conciousness" continues this pattern. 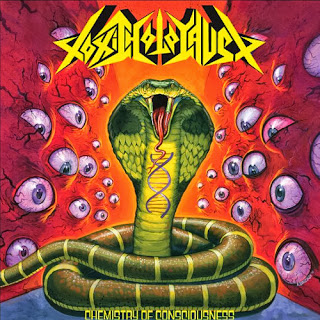 As I said above, Toxic Holocaust always stood out - they were always the black sheep of modern thrash. A sheep blackened by black-metal, and saturated in the toxic sludge of crossover, hardcore and punk. Toxic Holocaust represent the ever-willingness of thrash to flirt with the darker, more acrid and bitter side of metal. Of course, the question is, does Chemistry of Conciousness, which is released later this month, carry the banner high? Perhaps some suspected that "The Yellowgoat Sessions" from earlier this year would in some way have drained Joel Grind - the ever at-the-helm mainstay of the band - of his old-school impulses by giving him the breathing room to spew some filthy, first-wave black-metal style material onto vinyl in a nice quiet room somewhere. As it turns out however, Chemistry of Conciousness is not the clean, straight-forward record which some suspected - indeed, it's probably a lot more filthy, tangled and generally deliciously toxic than its predecessor Conjure and Command, which while solid, memorable, and still decidedly old-school, definitely came the closest to a conventional thrash record in the bands back catalogue. While still a thrash record at heart, as all of Toxic Holocausts works are, Chemistry of Conciousness steps up the d-beats, the black-metal influenced riffs, and the rolling, tumbling guitar work and redoubles the savagery. In a word, the things which far too many thrash bands do far too little of.

If the essence of Chemistry of Conciousness can be distilled into a few phrases, one of them would certainly be intense. Another, without much doubt in my mind, would be savage. The album rushes at you like a wild dog, faster than you can quite deal with, and with more bite than you expected. The guitar tone alone is the sort of thing which makes the rafters of the building quake - it sounds like a glacier moshing its way through a valley at a thousand miles an hour. In fact, it's the sort of guitar tone which makes your speakers a little bit worried. It's mixed loud, but not in the plastic, modern way that so many modern thrash bands opt for - the tone doesn't sound phoned-in, it sounds like the sort of thing cultivated over years, making use of the right hardware. The whole album, whilst of course varied in tempo, really knows how to give the feeling of a band going flat out, with manic but tight playing on tracks like "Silence" really upping the energy, and placing it on the shelf beside the crushing tone. It's quite rare for thrash to manage to be crushing at all - intense, yes, but crushing? Crushing is a bit more of a feat. It can safely be said, however, that Toxic Holocaust have managed to conjure a crushing edge on this album that I've not seen replicated in many placed before. All in all, the whole record is a traditional Toxic Holocaust sonic beating, with a hefty dose of everything which made me enjoy the band to begin with, rejuvenated, and ready for war. Implicit in the return of the old logo, perhaps, is the return to greater extremity and underground ethos.


Once again, we are met with a new Toxic Holocaust record. Since discovering the band properly, I've always had faith in Joel Grind and company, and their ability to make consistently good records, but Chemistry of Conciousness is definitely one which goes above and beyond, shrugging off interference and circling the wagons to conjure a record which, above all else, is Toxic Holocaust to it's very core.

and thus, I'm introducing decimal points into my reviewing - I'm incredibly tired with only having ten numbers to work with, and the time for .5s has come.