In their past two records, Australia's Thrall have proven themselves to be among the most grim and scathing black-metal acts in the southern hemisphere. I have fond memories of bringing their first CD - Away from the Haunts of Men - with me when I left home to go to university, as a reminder of the music collection I had to temporarily leave behind. Suffice to say, that may illustrate that I'm rather a fan of the band's work, and have been looking forward to this, the band's third album, since it was being vaguely hinted at some months ago - hopefully, the spirit of desolate misanthropy continues to run strong through the music. 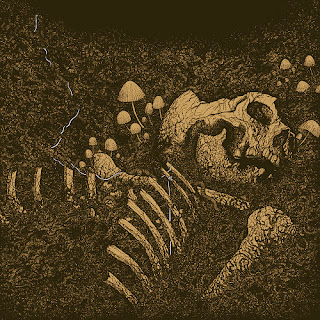 All bands - or all good bands - have features, properties if you will, inherent in their music which you always hope will be carried forwards as new material is conjured. For Thrall, there were several properties of this sort; the bands scathing but earthy darkness, and their propensity to make diverse black-metal, exploring many influences on the music's journey. As I sit and listen to Aokigahara Jukai - a record named after the "Suicide Forest" in Japan - a smile creeps over my face, for as dark as the music is, I'm glad that the band have managed to retain the things which I hoped they would. Indeed, there is every chance that these things have been expanded upon. The tone is thicker, more suffocating; at their heaviest, the guitars sound hungry; the sound of the earth desiring to slowly devour one's corpse, the synaesthetic sound the emptiness around you. The jarring guitar work in a higher pitch is present too, like dark vines or creepers, strangling and trapping in a claustrophobic grave. Aokigahara Jukai is every bit as dark as Thralls previous work, and, to boot, every bit as dark and morbid as its subject matter. The bands artwork, as ever, stands as a mission statement; once again the record sounds the way it looks. Thrall's magic has never been to create images of violent destruction, or of occult darkness - no - as ever, the band weave an image of extinction and slow-creeping decay, making use of both conventional black-metal sections, and a wide variety of others, each effectively deployed.

The cold desolation is especially well exuded by the doom-influenced sections, which deliver a crushing, but slow demise. Each Thrall record, including this one, certainly knew how to use the lower tempos and vicious feedback well, to trap the listener in an agonising web, from which they must hang, wide eyed and nervous. that's not to say, however, that the record is predominantly a slow one. It is, instead, loaded with dynamic changes and eclectic sections; on top of the doom influence, you've got to contend with some sections which can almost be considered black n' roll - all the more impressive for the fact that, despite that style's frequently "fun" nature, Thrall succeed in making it bleak. Tough, primal rhythms, often with quite simplistic drum patterns forge the record onwards with a frantic, almost panic stricken feel, complimented by crushing riffs or the accustomed blood-curdling tremolos, with enough lower-end to kill you in your sleep. It's sometimes difficult to explain what Thrall's atmosphere most suggests to the ears, but I can best describe it as a darkness, perhaps a melancholy at times - but one too great for mere human concern. Once again, Thrall have created the music not of Man's suffering per se, but of his conspicuous, dead, absence. The monstrous, suffocating weight which Thrall press down with is captured particularly well on this record, both the subtle tangled vines, and the thick, engulfing sections, which capture the essence of a scream which echoes far, but finds no ears to hear it. If a tree falls in the woods... no. If a man falls in the woods, and there's nobody to hear him... does it sound like Thrall?


It's always nice to have an album live up to expectations, and I think I can say with some confidence that this album has. What Thrall create is distinct, unique, and thoroughly enjoyable. Perhaps not the music for a happy psychedelic experience in the woods, but nonetheless, powerful and vicious black-metal, and perhaps something beyond that too. For the third album in a row, they have created it well.