It's amazing how quickly time passes. I listened to the first Atlantean Kodex album "The Golden Bough" before I was at university. I can hardly remember what my head was like back then, but one thing which has run through it like an iron rod, ever-present, has been metal. It is with great pleasure that I now return to Atlantean Kodex, to listen to their second full length offering, three years on. When I first discovered doom-metal, it was epic-doom which drew me the most, and among the first bands I discovered in that niche was Atlantean Kodex. Consider me excited. 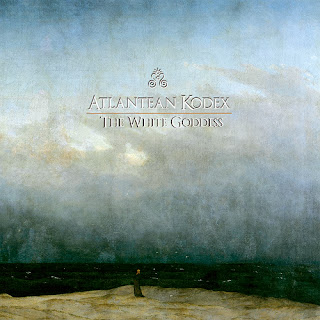 It's very natural, I suppose, to compare this record to the previous one. The Golden Bough was without a doubt a very enjoyable record - one which definitely had a great spark about it, but at the same time, it did drag a little bit. Not by much, granted, but it was certainly a little bit challenging to listen to at times. The White Goddess, by comparison, feels, in a word, mature. Compositionally, there are no sudden stops, no riffs crammed into place slightly haphazardly; instead, the music glides along smoothly. Taking three years to compose this record has certainly made a record which feels like three years of work, which is extensively pleasing to the ear. The music feels more dynamic, too, with a stroll through more varied tempos, and more exciting bouquets of style and atmosphere, with the song-writing feeling extremely solid throughout. The record is a little shorter than it's predecessor, but not less substantial; it is lean, as opposed to starved, and certainly manages to pack a lot of punch into it's relatively modest hour of run time. While only five of the tracks are full-blown songs, the intros and vignettes in between manage to be reasonable atmosphere-boosters, as opposed to needless luggage in sonic form, which was certainly a fear which I have swiftly been alleviated of. Three main observations from listening to the musicianship on this record are thus; the riffs are compositionally very interesting, the vocals are much more lucid and present - really making themselves felt, and thirdly, the lead guitar really carries a lot with it now; shimmering solos, right through to subtle but vital lead-work during the body of the song.

There is no doubt in my mind that The White Goddess is an epic doom record which really knows how epic doom should be crafted; the thunderous music is vast in scale, ambitious, and truly glorious with regards to atmosphere; the riffs leave shock-waves like cavalry charges and waves hitting the shore, while the softer sections build excitement, and absorb you into the music's world of wonderment. The thick, almost ever-present ambience in the background; choral vocals, keys, and the like, stir the album up into thick, Bathory-like crescendos and brooding, beautiful lows, whilst the vocals soar, over the top of the mix, and really propel the music in a way they perhaps didn't quite manage to on the first record. In other words, as good as The Golden Bough was, this record feels like Atlantean Kodex reaching their true potential to tell a story - to make a journey. Clichéd as it might sound, this record is one which takes the listener on a hefty journey, from the burst of brass in the intro track, right through to the slow, fading piano at the end of the album, it draws the listener in, and good lord, it's a superb album to be drawn into. There is a certain aura which accompanies a record which is extremely solid - crafted with care, dedication and countless weeks of effort, and The White Goddess exudes that aura without the shadow of a doubt - every second of the record promises that there is plenty of wondrous music still to come, and until the very last second, it's testimony stands up.


It's always nice, whilst writing a review, to contemplate that metal might have a future classic, or, at the very least, a renowned record, on its hands. The impressions I've been getting whilst listening to The White Goddess suggest to me that it's very likely to be one or the other of the two - and either way, it's a damn solid record. And so I conclude with this short paragraph, for a long record. One which is well worth listening to.