Everyone has that underground band which, somehow they stumbled upon while they were barely into metal properly at all yet, let along conciously exploring the avenues down which such bands hide. Everyone, I'll venture, also has no recollection of how they stumbled upon said band, either. For me, one such band has been Sweden's Pest, a black metal outfit who very much avoid flirting with the mainstream, but who, for the first times since I discovered them, have released a record. Ample reason, I suspect, to take a listen right now. 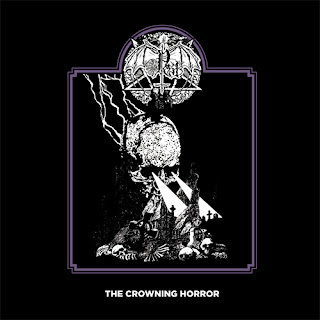 The first, and most noticeable change in Pest's sound between records is, by far the huge swerve towards the old-school which the band have taken. Of course, records like Rest in Morbid Darkness, the one before this, were very old-school black-metal, but in The Crowning Horror, Pest transport the concept of old-school to new heights. It's not so much a devolution to a first-wave black metal style, even - it's... beyond that. While black-metal elements are still present, with a traditional dark atmosphere and adept, unsettling lead guitar, there is a thick, to my ears perhaps unique, blend of rock and early metal. I heard somewhere that the album was being likened to a black-metal Judas Priest, and I can certainly see where that particular article was coming from - there is something very early eighties - perhaps even seventies, intertwined into what I'm tempted to describe as black n' roll. The record is stuffed with catchy riffs which, while retaining black-metal character, also have a lot of breathing room, and an extremely soft, dry tone in places, reminiscent of Ghost's work on Opus Eponymous, with a subtle, muted playing style which offers a less intense but undoubtedly enjoyable approach to the conventional darkness of black-metal, balancing the very muted sections with some slightly-more intense parts in the vein of old-school, full-on black metal Pest, striking an interesting balance of development as a band, whilst still retaining, the familiar, comfortable features too.

The Crowning Horror is the sort of record which it takes a few listens - perhaps more - to work out what way is best to listen to it. It's certain that trying to listen to it fully as a black-metal record will be a difficult task; how would you digest the softer sections? But at the same time, if you tried to listen to it as just a rock n roll album, you'd probably have trouble dealing with all of the blood. Ultimately, the record must be listened to, challenging as it may be, as a synthesis of styles, and a very different synthesis from the way in which other black-metal bands such as Darkthrone, who were quite clearly a big influence on Pest's black-metal work, adopted more old-school edges. Instead of heavily punk orientated influences, Pest seem to have opted for plain old heavy metal, and the album is definitely all the more absorbing to listen to while one marvels at the interesting consequences of combining these two ingredients. Perhaps most notable is how thoroughly the atmosphere of the album is delivered by tremolo and eerie, screeching lead-guitar and solos, as opposed to  simply having distorted guitars assault the listener as a wall of noise, which the band have opted out of. Instead, Pest have opted for subtlety, trading blast-beats for Mercyful Fate style occult shenanigans, encapsulated by a coming-together of genuinely dark, but equally quite fun material. Adventurous perhaps, for a band who have played conventional black-metal for so long, but nonetheless, extremely successfully done.


I'd been wondering for some time not only if Pest were going to create a follow up to Rest In Morbid Darkness, but what sort of form the record was going to take. Suffice to say, as I sit and listen to The Crowning Horror, I'm impressed to quite an extent, not only by the music itself, but by who made it. I'd expected a new Pest album of the quintessential black-metal variety, and this divergence from that expectation is not only welcome, but refreshingly exciting.