That's not Metal! #003: Bullet For My Valentine - Temper Temper

I wasn't going to do this, you know. I could not have done, but after some encouragement, and factoring the fact that it's rare indeed for me to review something I probably won't like, I've decided to do just that. Where to begin? I wondered. Bullet For My Valentine are, sadly, what the people who judged me at high-school thought I listened to, while in actual fact Venom or Enslaved were most likely coming through my headphones. I'm a metal-elitist, and I'll happily confess so, and usually I'd avoid reviewing material like this, because, frankly, it's not my place to judge bands which aren't in the metal spectrum. I'm not here to tell the scene-kids what they should and shouldn't listen to. Or so I thought... but then some said "Go on, do it" once too many times. So I did. 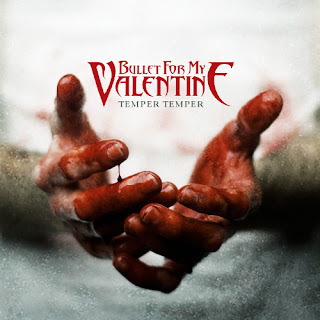 At one time, I respected Bullet For My Valentine for sounding vaguely more metal than the rest of their metalcore brethren that I had to endure. They had some good songs - Waking the Demon, for example, was a real belter, and was certainly the kind of song I could bear to listen to without too much hassle. Frankly, when you're fourteen, their leads and catchy choruses really are something, but those days are gone now, and what's left is a dubious tangle of music indeed. I'm not fourteen any more, and I haven't been for quite some time. I'm certainly not in the commercial metalcore demographic, and I'd like to think I never was, especially in light of what I just spent in excess of forty-five minutes allowing to pour into my ears. It's truly mind-blowing how generic this album sounds, not just generic for the band, but for the genre. The first notes instantly evoke the image of multicoloured, over-pampered scene-kids hanging out in the shopping mall with delusions of edginess, although they'll probably have to wait for the post now to get a hold of the album, considering that HMV is gone. The lyrics are massively angst-filled and riddled with over-simple, sugar coated verses which will immediately appeal to the thirteen year old who thinks their life is over because their packet of fruit pastels wouldn't come out of the vending machine.

Of course, a little background on the album is important in terms of neutrality here, although in this review, neutrality is analogous to an innocent missionary about to be char-grilled by a clan of metal-elitist cannibals who use vinyl as currency. Anyway, to quote the website which is streaming the album in full, "Temper Temper was recorded in Thailand – with the band having prepared nothing in advance, in order to capture "a more spontaneous, energetic vibe"". I would promptly begin to worry if all but the most steadfast bands announced something of this nature, and when it's a band I'm fairly biased against, I can safely say it had the reek of catastrophe. A friend of mine once compiled a black-metal song without preparing anything, and frankly, it sounds vastly better than this. You can tell the band, by not preparing, have cut even thinner their chance of making well-thought-out material. Energetic the music is certainly not - very little of it arrives at the kind of tempo the band once delivered, and the plodding, über-generic riffs and annoying wanky leads dominate. The whole thing, to quote modern-art tycoon Lars Ulrich, sounds "stock". Temper Temper is one of the most overtly commercialised metalcore releases I've ever subjected myself to, and one which speaks to all of the ears which crave generic, processed emotion.


I would put one of the songs from the album here, as I usually would, but I've put some Venom on instead - it's better for all of us.

Aaah... nothing cheers me up like a quick Venom break on a long day.

There is a reason that I don't usually review things which I dislike, and that is that I strongly believe that you shouldn't be persecuted for listening to what you want to listen to, and I strongly believe too, that nobody should prescribe what music is good and bad. However, how-very-ever, like many a business-man, I know when to forget my principles, and it's certainly a damn fun way to let-off-steam, to cool down after a busy day. You can enjoy Bullet For My Valentine if you want to - there's nothing wrong with doing so.