A lot of people, whether they know it or not, will be familiar with the works of Steve DiGiorgio, who has lent himself as a bassist to a huge number of bands ranging from Control Denied to Vintersorg. Not quite as many people, however, have heard of, or listened to, the band in which his career started. In fact, Sadus remain one of old-school thrash's underrated powerhouses, a band which released solid albums well into the doldrums of the 90's. In this review, I'm going to take a look at the album which started it all - 1988's Chemical Exposure. 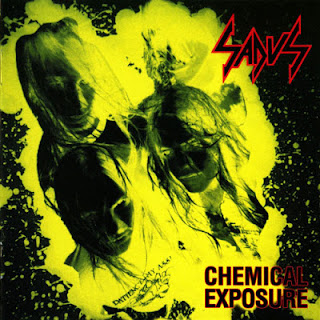 Sadus, I think it can safely be said, are not a thrash band suited to the thrash-fan who has only just worked out what order Metallica's albums are in. Sadus are far more suited to the discerning and well immersed fan of everything chaotic, caustic and abrasive. Chemical Exposure is a short album, but also one packed with agile and alarmingly explosive music, and, most of all, one which you need to concentrate on to fully enjoy. Unlike some of the more comfortable thrash, where you can sit for a fortnight and enjoy the fact that the current riff is going to be around for some time, with Sadus, you can't even be confident the same song is playing before and after blinking. I'm often weary of music of which "technical" is a primary trait, but when I first heard Sadus, I was content to consider them an exception which proved the rule. The guitar tone is murky, and the production values are noticibly budget, which doesn't always cast the music in it's best light, but below the surface, if you listen with a bit of care, and don't let the agile and uncompromisingly manic riff and lead guitar work induce a spasming, epilepsy-like sensory-overload, there is a vast smörgåsbord of impressively technically adept, but at the same time hypnotically hooky music, easily on a par with any of the offerings that technical-thrash has offered before or since - constant reeling, sporadic segues of sound link the more traditional but generally short-lived sections together, creating music which it's vital to keep tabs on, to avoid it becoming a blur.

The reward comes, of course, when you manage to avoid just that - the album becoming a blur. When you manage to listen to it properly, the album manifests itself as one of the fastest, most toxic and explosive thrash albums you're ever likely to hear. The production-values might muffle the guitar, and generally this can interfere with an albums ability to showcase it's technical prowess, but, to my ears at least, the murkiness suits the record - it makes it sound chemical, and toxic, as it's name would suggest, and transforms the sound into a clanking, quintessentially thrashy behemoth. I'll venture to say, however, that there's a hint of death-metal in the mixture too, and some of the somewhat crushing song-intros certainly have a bit of a death-metal scent to them, which is unsurprising, considering that the record was released in 1988, a time at which death metal was, to use that clichéd phrase, "starting to be a thing". It's difficult to attach genres to Chemical Exposure, as far as I'm concerned - the whole thing feels very chimerical. The album somehow feels both ahead of it's time, and at the same time, utterly with its time - it is as bedecked in hazardous-waste symbols, and as energetic and ballsy as any of the thrash bands which the 80's spewed out, but at the same time, whilst listening, you can really appreciate how new this must have seemed - nobody has made something quite like this, and that, on top of the music kicking a huge amount of ass in its own right, certainly sets the album up as a classic.


Chemical Exposure is certainly an album which anyone who wants the full thrash experience should have listened to - it would be a dire mistake indeed not to recognise it as a significant album of the genre, and one which influenced many acts to come after. Simply put, an album like this should not be ignored, especially in light of the twisting, turning and utterly entangling sonic punch it possesses.