First off, a thank you to BadGod Music for sending me some promo-materials which included this album. It's always a nice change to have music offered-up to be reviewed for a change, instead of picking bands at random as I usually do. The first band I've decided to take a look at from the selection given to me is the Spanish blackened-death-metal outfit Tsar Bomb, and their début album "Neowarfare", which was released last year. 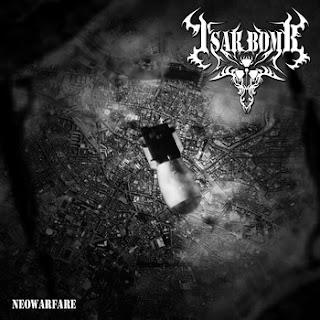 Tsar Bomb play what can best be described as "modern" blackened death metal. After the hugely tension-building electronic album intro, the music explodes into life, with strained, slightly murky guitar, and drums which are very obviously programmed. While the rhythms laid down by the programmed drums propel the music well, and are dexterous sounding, I can't help but immediately observe that they intrude rather into the rest of the instruments - The drum sound is rather angular, and very clicky, to the point of being a bit distracting. It's more a production issue than an issue with the music itself, and it's something which, after a while, I can come to overlook. I never like to start a review with a criticism, but it's certainly a prominent feature of the album - it will, perhaps, be something which appeals to people who love crisp, clean production, so there's conceivably an upside.  A few songs in, it becomes clear that Tsar Bomb are a band on a mission to be extremely intense - there aren't too many moments focussed on the atmosphere, but a great number which focus on fast, thunderous drumming and extremely agile, dynamic guitar work - many of the riffs could qualify as outright "technical", and the music as a whole is likely to appeal both to fans of blackened-death metal, and fans of music which manages to be noticeably technical and complex - there aren't too many riffs on the album which aren't in some way impressive in terms of musicianship.

The album isn't sterile when it comes to atmosphere either, however, even if wasn't at the forefront of the musicians minds. The album has an atmosphere full of blitzkrieg, carnage and twisted metal - the music sounds like warfare, and enjoyably so. It's always good to hear a band, and an album, which really mirrors its lyrical themes through it's tone and style, and that's certainly something which "Neowarfare" manages to do. The guitar tone is modern, but definitely manages to be dark, and the black-metal influence is very tangible. While he band are far more on the death-metal side of the equasion than the black-metal side, the occasional obviously black-metal influenced moment certainly brightens up the record, and makes it more varied. Manic, crawling melodies and tremolos in many sections certainly make the album darker and at times even sinister - claustraphobic and paranoid, like the imminent nuclear apocalypse it evokes. If the band can get a drummer on board, or produce their programmed drums slightly more organically, then they will be come formidable indeed, and, frankly, even with the drums nagging slightly at my ears, the album sounds very solid, and certainly got me nodding my head at the desk, which is very much what an album of any heavy-metal sub-genre should be doing.

I wasn't sure what I was going to get when I started to stream the album, but I can safely say that I'm pleasantly surprised by the vicious, energetic strain of blackened-death-metal which it turned out to be. Tsar Bomb certainly aren't reinventing the wheel with their début album, but it's an enjoyable record nonetheless.