I should almost certainly have listened to Bulldozer by now, but the truth of the matter is, I only really got around to doing so yesterday, although I had picked up a vague knowledge of what the bands context within the metal-scene of the day was, in light of which, perhaps, I should have been more motivated to listen to the band. Nevertheless, I've found the band now, and judging by what I'm hearing, I'm sure that by the end of a session of listening, I'll probably regret not having done so sooner. 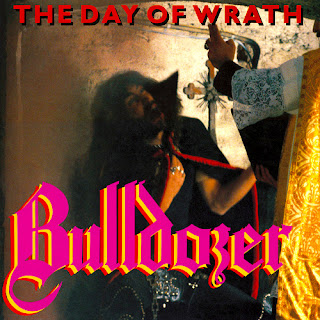 Much like, and indeed, perhaps somewhere in between Venom and early Bathory in terms of style, The Day of Wrath is a chaotic and raucous album as much as it is an evil one, the rock 'n roll spirit is very prevalent indeed, and the album sneers, spits and swaggers as well as any Venom record did. With songs like "Whisky Time" ensuring that the alcohol consuming, hell-raising side of the business isn't neglected in favour of the black-mass. At the same time, however, this record does sound ominous and evil - the guitar tone is raw and extremely unforgiving, the riffs are scathing, and the notes use ooze the occult - more intricate than Venom or Bathory were using at the time. The drums, sometimes in time, sometimes not quite, but always enjoyable to listen to, pound menacingly, as if from the depths of hell, in that interesting not-quite-on-the-beat way that bands just don't do any more. While the music still isn't massively tight or polished, the band certainly use some technical ability and musical know-how to conjure things which may just have been beyond the reach of many of the somewhat primitive first-wave black-metal acts around at the same time. Songs like the album's closer "Endless Funeral" have winding passages reminiscent of later, more quintessential black metal pieces such as "Freezing Moon" by Mayhem, with dark, but at times practically psychedelic and even slightly bluesy guitar playing.

Many of the aspects of the album superbly illustrate the grimy, rabid music of the first-wave of black metal. The vocals, for instance, laden thickly with reverb, and roared, savagely and demoniacally really have a trademark first-wave black-metal sound, once again, sitting somewhere between the harshness of Venom, and the outright possessed sound of early Bathory, in fact, the band as a whole really cover what first-wave black-metal was about, and indeed really foreshadows the lively satanic speed-metal and black-thrash which arrived in their wake. It's a real shame that this album seems to be a bit more difficult to come-upon than those of the more widely recognised bands in the movement. Frankly, Bulldozer deserve easily as much credit, particularly considering their different and at times very interesting take on the genre - quite intricate, twisted atmospheres, as opposed to the instrument-mashing war-machine of Venom of the chord driven leanings of Hellhammer. Bulldozer holds the most in common with conventional speed-metal, in many ways, but also creates a highly original and grim sound with it, all without losing the sneer of good old fashioned rock n' roll, which is precisely what I like in first-wave black-metal as an overall sub-genre.


As I had predicted before I started writing this review, after a few listens to the album, I can safely say that I should have gotten into Bulldozer's music long ago. I'll certainly be keeping an eye out for their albums in future, and I can safely say that this one has felt like the missing piece in the puzzle of first-wave black metal.