I use the phrase "rock n' roll" fairly frequently, describing everything from grimy crust-punk to swaggering, blaring death metal. This time, however, the band in question call up what is perhaps the most true instance of me describing something as "rock n' roll" in many many reviews. The album I'm looking at is the self titled full-length of San Fransisco Sabbath-enthusiasts Owl, released late last year, and filled to the brim with rocking goodness. 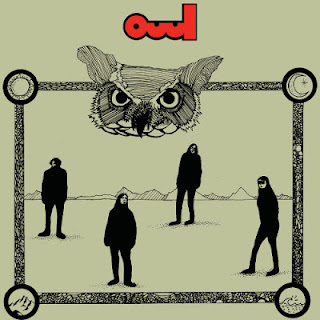 "Owl" is the sort of album which can be appreciated equally by people who are deeply into metal, and by people who dabble in it. Diverse is certainly a word which comes to mind fairly promptly - no two songs feel as if they are mined from quite the same vein, and I'm fairly certain that, over the seven tracks, the same vocal-style wasn't utilised more than once, from occult and smooth to a gruff, almost sleazy rocking wail, but at the same time, the record manages to offers a pleasingly coherent, flowing musical journey, through a vortex in time to the glory days of rock n' roll, and back again in the time it takes for the needle to travel across two sides of an LP. United by a blues-laced, 1960's influenced aesthetic, the album voyages through doom-bringing regions, and more upbeat sections closer to old-school rock n' roll as opposed to overtly falling into any metal subcategory, and a dozen places in between, all gathered under the banner of reassuringly crunchy, organic production. The self-evidence of the fact aside, "Owl" seems to be the kind of album which you really listen to and go "yeah, a band made that", as opposed to sifting through plastic-production looking for the soul of the instruments involved. The warm productions of this album certainly bring out the best in the sound, and the lead guitar, particularly, has a lovely golden hue, and a crispness... or I would say that if I had synaesthesia. I hope you understand what I mean nonetheless - my entire hobby of reviewing depends on my ability to conflate sensory information in a manner that people feel inclined to read. I digress, as ever.

To carry on the theme of diversity, the album really is one which offers a bit of everything - long, eerie extended drum solos that are tastefully constructed, impromptu Iron Butterfly covers, and considerably more besides. Everything which a rock album should have is, I can happily say, present and correct. The album ranges from psychedelic to ballsy, which is considerably more varied than your average modern metal record, in which bands tend to do precisely one sound, and only one sound. Owl come across at the kind of band who realise that a full length is an opportunity to do lots of different things musically, and that's certainly what the album gives a sense of - seven tracks of very different music. Since I listened to the "Stone Loner" 7" the band have certainly come a long way, and there is much more going on in the full length than in the conventional Sabbath-worship of that single - There was certainly a spark of spice in the bands sound then, and I definitely enjoyed the music in that style, but it's nice to see an even much more dynamic and adventurous sound - content to explore more numerous influences and directions.  The end result is a solid debut album, with some great hooks and extremely wholesome feel.

Music like this may well be the next retro-trend, with slews of occult rock and sugary, Sabbath-infused doom flowing past my ears with great frequency. Owl could well ride this wave, but in my eyes, it won't be cynical wave-riding, and neither is their music sugary. "Owl" seems like a honest, sincere record, and that adds a further layer to it's appeal. Rock n' Roll.