For me, personally, the last few months have been packed with doom-metal, and I can safely say it's a genre I'm starting to explore to the fullest of my capabilities. Black Magician are a band that, while not recommended to me directly, tales of their music, filled with praise, have certainly crossed my path frequently. I've been hearing good things particularly since their début full-length album - memorably titled "Nature is the Devil's Church" was released last year, and for this reason, and because I'm seeing them live in a few days time, I thought I'd best give the album a few preparatory spins. 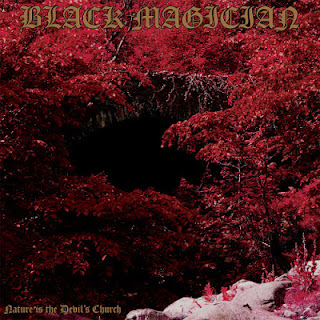 After a few minutes of listening, carefully sipping the sounds which the album has to offer, I came to two conclusions; Nature is the Devil's Church is crushing, with riffs which sound like the roaring, grinding movements of tectonic-plated deep under the earth, but at the same time, they are not claustrophobic in the way many similar doom bands can be. Coupled with the flavour which the album-artwork gives to the music, the riffs don't suffocate you with murky, sinister tentacles, but instead it leaves you in the fresh air, perhaps with trees and birdsong around you. The music feels aerated and bright, albeit still as heavy as anyone could want - An excellent reconciliation of heaviness with an earthy, shimmering feel. There are many things which the band seem to be doing in terms of sound which I've not heard doom bands do in quite the same way before, too - the riffs are reassuringly traditional and chunky, but the haunting, ethereal and at times deliberately discordant synth work which is woven into them sounds unlike anything I've heard before, making for a sound which is disconcertingly beutiful, fluid and extremely apt to be gazed into, staring into space as the guitars and synth trundle by like a benevolent lava-flow. The particularly low-fi synth sound the band have settled on is particularly interesting, and gives the whole album a deeply old-school, psychedelic rock n' roll feel.

One of the impressions I really get whilst listening to the album is that variety is the spice of life, and the band themselves know it. Certainly, there are dozens of minutes of fresh but conventionally crushing and riff-driven doom, which is definitely not a cause for complaint, but there are also a dozen more minutes dedicated to experimentation and variety, which really helps to draw the listener in, and make the album worth listening to all the way through. Beautiful, shimmering, slightly folk-laced acoustic guitar sections, and lengthy lead-guitar emphasised atmospheric sections really grab the record and lift it above simply being another doom album - it's fairly apparent that this is an interesting one, and one which has no fear of being dynamic and varied throughout it's running time. I overtly paid no attention to which song in particular was playing, but decided to listen to the album as a whole, and I can safely say that it's very smooth flowing and organic - the songs work in the way they are arranged, and the whole is more than the sum of it's parts. It's an album which I really appreciated the level of originality in whilst listening - sure, the vocals I've thus far neglected to mention might sound rather like Lee Dorian, and I'm sure there are people who won't be too happy about that, but frankly, for me, it works rather well - it fits the music to a tee, and it feels natural, as opposed to in any way blatant or forced.


This is one of those albums which I made the concious decision to buy as I listened to it, and that's precisely what I plan to do. Doom seems to be going strong as a genre, and releases like this are doing a find job of affirming that suspicion. I'm already looking forward to what the band next have in store for us.