If you follow the way in which I conduct my reviews, you'll realise that quite often, despite a new-release by a band being hot off the press, I'll review one of the band's older albums. While making me a bit of a bastard, this is simply  the way of things, which I will now demonstrate. I've enjoyed the musical exploits of Running Wild for a while now, and in this review, I'm turning my attention not to the new album, but to one of the band's older works; "Black Hand Inn". 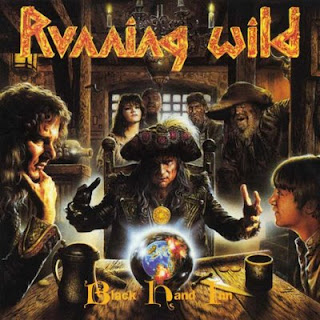 Running Wild are, contrary to the awareness of many a young metal-fan, including myself at one time, the original heavy-metal pirates, and were conducting their skulduggery decades before the likes of Alestorm or Swashbuckle arrived on the scene. Black Hand Inn is an album which has the sound of a mature Running Wild, further developed than their earlier works such as the undisputed classic "Under Jolly Roger", and perhaps a little more intricate and akin to power-metal than the band's speed-metal roots, which nonetheless still pervade the music excellently, in the riffs and song-structures, making an epic, highly melodic and monstrously catchy work which manages to combine atmosphere, catchiness and an engaging level of musical prowess, a trinity of musical virtues which exist on this album at what seems to be very close to the optimal ratio. Of course, perfection is subjective, but even the greatest detractor of the bands work has to grant the sheer solidity of the music on this album a certain respect - the factors align nicely to make an album which really oozes with the spirit of what heavy-metal is all about.
I picked this album at random from the band's back-catalogue, but I feel I've certainly inadvertently picked a classic of the band, with the speed/power metal combo and booming vocals really feel like the quintessential sound of  Running Wild, in the way that Powerslave might be considered a very quintessential Iron Maiden album. It certainly manages to illustrate what I enjoy about the band; As always, the choruses are massive, the riffs instantly memorable, and the album overall sounding so strongly like the band that made it, if that makes sense. I knew from the onset, that the album would be difficult to review without sounding like I have only positives to say; such is the consequence of Running Wild's streak of classic albums which runs for at least the first fifteen years of their existence. Certainly, the album is of quite a tried and tested formula, and is indeed very consistent with what came before it, in many sense, certainly having songs which wouldn't have been out of place on an album half-a-decade earlier. This perhaps denies the songs the ability to strongly attach to a single album's character, albeit only a little. Fortunately, Running Wild are the kind of band who have discovered a seam of something good, and for a long-time, at least, just kept at it, not unlike bands such as Bolt Thrower, who are afforded a similar cult status.
I've not listened to enough Running Wild to know as much as I'd like about the band - Most of my listening comes from the "Best of...", and I didn't know what to expect when I listened to a whole studio-album. I can safely say I'm pleased - it's definitely an excellent album. It must, I think, have been tricky to select the tracks for a best of, when there are so many good tracks available.
This is a 9/10, definitely.
Links:
Running Wild Official Site
Running Wild on Myspace
Running Wild on Facebook
Running Wild on Metal Archives