In Onirica is the promising debut full-length by Italian doom-metal outfit Bretus. I'd not heard of the band until they sent me a download of the album and asked me to review it, and, today, about a month later, I've gotten round to reviewing it. From the very onset of the music, it became apparent that the band are a force to be reckoned with. 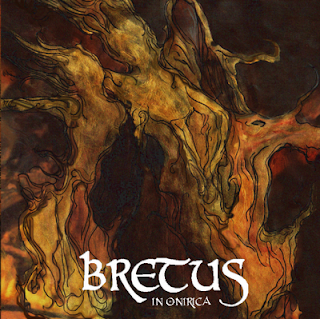 Sound wise, Bretus seem to sit on the line between being bluesy, psychedelic and "stoner" doom and something more epic and traditional. Crushing and head-nodding, but also imbued with a thoroughly clean feeling, with tones which are murky, but also have a wide open and clear-headed. The kind of doom which you don't have to take any drugs to fully enjoy.  The production of the album, especially, is extremely agreeable, sounding very, very natural and really bringing everything together in the most wholesome way possible - to be vague, the production is simply nice, certainly ticking all of the boxes for what I look for in production - the guitars sound organic, clear, but also pleasingly enveloping, in that quintessentially doomy way, and the drums sound fresh and un-tampered with. The songs are solidly written, with massive riffs which are very much larger than life, memorable and often very well written. The whole album feels like that; solid, professional, and very much a cohesive, complete sounding work.

The album isn't entirely mono-stylistic however, and there's definitely enough diversity and experimentation to keep the album interesting and engaging. While consistent, the songs also journey through a fairly interesting range of experimentation, with twists of many styles here and there; acoustic sections, and darker, almost occult sounding parts which differ from the albums typically epic, somewhat light sound. The occasional more energetic, higher-tempo material also kept my attention, and certainly gave the album an injection of force and movement. The album also shows plenty of imagination, with songs like the closing instrumental "Black Sheep", aptly named for sticking out from the rest, bordering on the insane, with all manner of keyboard work, tempos and styles mashed into one splendidly mind-boggling track. The vocals, throughout the album, have an epic, melodic egde, but also possess a toughness which keeps the music a little rough around the edges, to good effect - Bretus may have made an epic doom album, but it's definitely not over-the-top, at least, not in a bad way.


I'm impressed by Bretus, and I can safely say I recommend their music to anyone who likes doom in all it's forms. In Onirica is a solid, very complete sounding album, and is fantastically well-rounded. If the band can keep up the quality of this release, they will achieve great things.