Manowar are something of an institution in the world of metal, and such a titanic outfit cannot be ignored. Both to my musical taste, and to the variety of reviews I aim to do, Manowar have become simply too large an elephant in the room to ignore. I've not listened to a whole Manowar album before, and it seems to be a good time to do so. I didn't entirely know what to expect. Kings of Metal seems to be something of a quintessential album, and as such, seemed the one to aim at to whet my appetite. 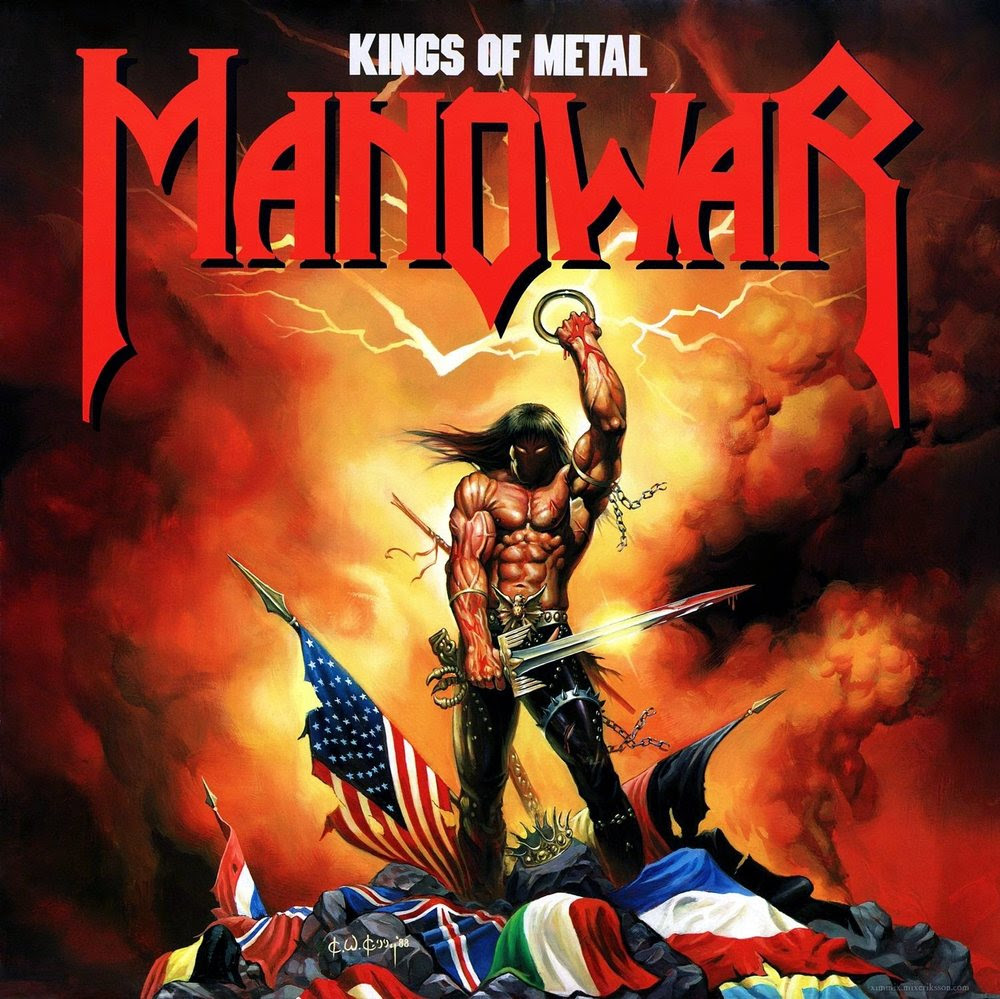 Manowar are, I've always got the impression, one of the pioneers of the "metal is great, lets play metal songs about metal because we're really metal" persuasion of traditional metal. This is a lot more forgivable from a band with the veteran status of Manowar, and they manage first and foremost to make it quite fun, and only as egotistical as is absolutely necessary. Cheesy is certainly something the band manage to do, but I'm assuming that this happens to a greater extent in later albums, because this album certainly wasn't as over-the-top as I expected, and had braced myself for, in fact, a decent number of the songs transcended being fun and catchy, and were genuinely quite epic - "Heart of Steel" for example, was actually quite a heartfelt and stirring ballad, albeit done in the synth-heavy, warrior style which the band, to this day, have made their own. This, frankly, suits me fine, and seems a very sturdy vehicle to transmit the songs beauty. While less immensely well known than other traditional acts of a similar time, such as Maiden and Judas Priest, Manowar are certainly not mediocre, and are certainly, at least on albums like this, quite impressive in what they do.

The vocals on the album are impressive - powerful, often emotional, and unsurprisingly very metal, a mid-range singing voice, with occasional and unexpectedly competent falsetto screams here and there certainly make the vocal department of the music near-perfectly contain what amounts to metal. While the guitar-work isn't as intricate as some bands of the time, or indeed, in general, it still manages to be damn catchy, which I feel is definitely fairly close to what Manowar were aiming at - nothing particularly self-indulgent, bar perhaps the somewhat mind-boggling bass cover of "Flight of the Bumblebee", instead the band have made a solid album out of songs which are fun, and well worth singing along to. Unlike so many of their peers, Manowar go down the path of making the songs arse-kickingly enjoyable, as opposed to aiming primarily at beautiful or evocative, although, if you remember paragraph-one, they manage that from time to time too.


Manowar, it seems, are one of the bands I need to throw on the growing "I should have listened to that a lot sooner" pile. A little bit cheesy, perhaps, and the lyrical themes are quite predictable, but that can be ignored when the music is so thoroughly enjoyable. More than expected it to be, which is fantastic.