Seeing Death Angel live last night has really got me into my thrash-state-of-mind. I felt I should review a thrash album, and fate arranged that it would be this one; Nekromantheon's second full-length; Rise, Vulcan Spectre, an album which has met a good reception worldwide, as one of the finer thrash-offerings of young bands in recent years. 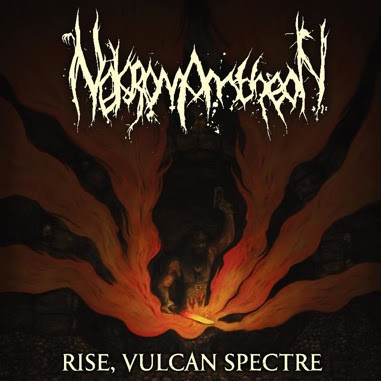 Nekromantheon play an impressively fast and intense brand of thrash, with an overall dark feel, in the vein of bands like Slayer, Sadus and a good number of black-thrash bands such as Aura Noir. The band sit somewhere in the middle in regards to style - dark, certainly, but perhaps not full blown black-thrash, more akin perhaps to the works of bands like Sodom, like whom, Nekromantheon manage to play a style of the music is generally taken to be  pure thrash-metal, but still sounding caustic, evil and dark. One of the most striking things about the bands style is the solos; there are so damn many of them, and they're exceptionaly tight and well-played - rolling out of the guitar perfectly, with an agreable and oldschool tone. The solos often really dominate the songs, and are definiely effective in grabbing the listeners attention. There aren't too many thrash bands out there at the moment where I'd be prone to saying to my friends "Holy fuck, have you heard the solo in..." but Nekromantheon have certainly managed that in this album - the solos are talking points, not mere decorations. The vocals, too, really stand out nicely, with an angry, harsh edge, slightly remeniscent of Watain to me, which suits the head-over-heels madness of the music excellently.

I wouldn't want to give the impression in writing this that the band are for the most part defined by solos and vocals however, the riff's are equally impressive in places; Almost always dark, with hints of Slayer, especially in terms of the notes and scales used, but also packed full of black-thrash style tremolos and all-encompassed by a rabid, rampaging tempo which is in places mind-blowing, and at all times impressive. It may make the album whizz-past at incredible speed, sometimes a bit too quickly for me to wrap my brain around, but on the plus side, I'm very much aware that what just whizzed-past was a damn good album. The themes which the band use in the album appeal to me especially, with Greek-mythology being, without exaggeration one of my all-time favourite things ever, which render Nekromantheon's lyrics fascinating to me, in addition to being a refreshing change from beer, nuclear-war, and the other themes which dominate both modern thrash and thrash hailing from the 80's. It's excellent to hear something a bit different


All in all, I find Rise, Vulcan Spectre to be a solid, albeit quite quick, album. It's definitely a bit too intense to have on in the background, but that's a good thing, because when, like I finally got around to doing, you listen to the album free from distraction, it's a massively rewarding collection of music.