I usually try to stray away from albums which are untouchable classics, but few of Bathory's releases are not classics in some way. I've regarded a Bathory review as an inevitability for a while now, being a massive fan of the band - and the only hurdle to overcome was to find an album to do so with. "Under the Sign of the Black Mark", the third album, has risen to being my choice. 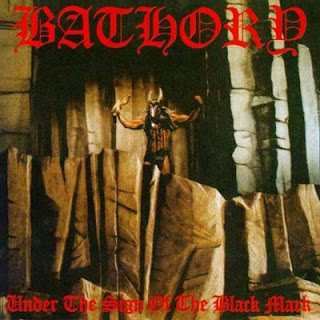 The album marks something of a turning point within Bathory's sound - and the move towards a more epic sound, which would become apparent in the follow up album "Blood Fire Death" begin to become apparent in this album, in a way which it was not in it's two predecessors. While still thrashy, Quorthon at this point seemed comfortable to go with a more atmospheric, slower approach, which is exemplified in tracks such as "Enter the Eternal Fire", which is one of the strongest tracks on the album, with a dark, epic and vast feel to it, which was very much the shape of things to come. The album is definitely well balanced, in this respect, with other tracks, such as "Equimanthorn" retaining the speed and pounding drumbeats of Bathory's previous two offerings. Many consider the band to be one of the founders of black-metal as it is known today, and I'd certainly say that this album in particular gives a strong contribution to early-black-metal; While lacking some of the quintessential features of black-metal, this album certainly points in the direction.

The production of "Under the Sign of the Black Mark" is somewhat clearer, crisper, than it's two predecessors, however, not too much so. This is another example of the albums excellent balance, with the raw, dirty, thrash metal style tracks being catered for, but the epic parts of the album also receive some emphasis, and are boosted by the slightly cleaner production values. The albums darkness is probably the greatest of all of the bands works - The increase in atmosphere moves the sound away from the dirty-thrash sound of the first two albums, and towards a true proto-black-metal sound, especially in songs such as "13 Candles" which seems the darkest track on the album to me. Quorthon's slower paced guitar work is extremely pleasing to listen to, and has more form than the faster thrash work, which is pleasing too, but in a different fashion.


Listening to this album felt, to me, to be the sound of black-metal being carved out of the ancient rock. Anyone who enjoys black metal, I'd definitely recommend this to, if you haven't heard it already, that is. The album has the sound of a classic, and it's reputation is well deserved.