Hooded Menace are one of those bands which are formed by a group of individuals who already heavily experienced in the music world, with both of the members involved in the recording having come from relatively successful previous bands. The band are a fusion of death and doom metal, very much in the vein of bands like Asphyx, which can't be a bad thing. 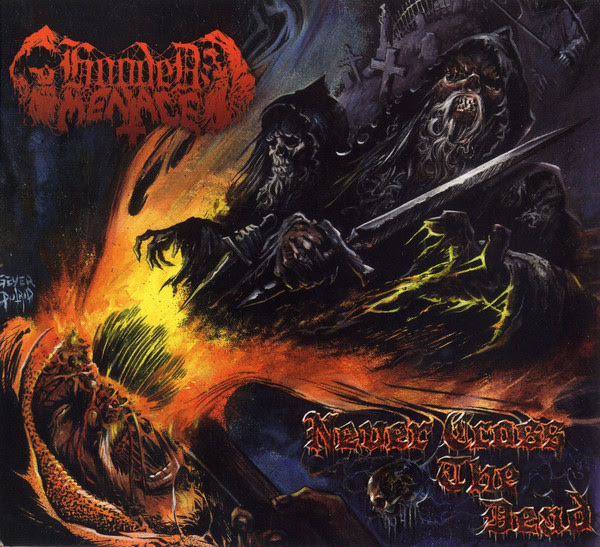 The mix of death and doom in "Never Cross the Dead" seems to be very nicely measured out, with extremely dark, sinister parts, blended with epic, slow paced and melodic sections. The entire album is also stuffed with extremely noticeable, heavily emphasised slow-to-mid tempo solos, with there usually being a few per song.
Somehow, the band manage to use techniques not commonly associated with death metal, or indeed particularly with doom metal, especially the use of harmonies, and other forms of "non-brutal" guitarwork which my limited guitar-vocabulary cannot quite explain, but I can assure you, you will notice upon listening to it. All in all, the blend of genres creates a brutal but beautiful concoction, which is definitely a case of the best-of-both-worlds, as opposed to two genres cancelling each other out.

The productions of the album are pleasingly thick - there's plenty of low end, earthy depth, but this does not compromise the higher parts of the music. The guitars especially, have a very enjoyable quality to them, with deep  resonant riffs, complimented by smooth, fluid lead, without too much fuzziness or treble. The vocals sit on top very well, seeming to fit snugly amongst the other instruments, and are one of the major sources of brutality within what is an album of much contrast, between the doom-metal epicness, and the aforementioned brutality. The mixture, when blended, is some pretty fantastic sounding metal. The combination of the death metal elements, and the earthy, booming elements of the doom, I will reiterate, is a fantastic combination.


The album manages, quite effectively, to be consistent throughout, sticking loyally to a single style. Of course, if your persuasion is to do so, you could interpret that to mean that all of the tracks are a "all the same" to a degree. I'm not going to deny that this is a little bit true, however, I think the band stick to a style, as opposed to simply creating an album which is excessively "samey"