When it comes to wondering what style of black-metal Undying's lengthy, and well-recorded demo (some say it's an album) - "A Haunt Within The Mist" is going to be, I think the sound of crows cawing at the start of the first track says it all. It's from the epic, melancholy, pine-trees and emptiness school of black metal. The band haven't done anything since, and this was released in 2006, but if they do, I'll be looking forward to it, on the strength of this. 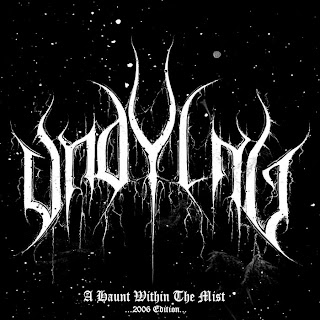 Undying seem very reminiscent of bands like Wodensthrone, and others of that ilk. Especially vocally - Making use of the echoey vocals which add to the albums atmosphere, giving it a melancholy sense that this kind of black-metal usually overflows with. This album is no exception. The guitars too, seem to have a lot of character. Unlike many atmospheric black metal bands, The guitars here are not simply a "wall of noise" which exists only to be a vehicle for the synth-sound, but are, instead, memorable and evocative, without being merely a drone - Sometimes the bits which make the guitar sound great are the bits with no noise in them. The synth effects are also enjoyable, being used in more moderation than you might expect in some songs. This makes them even more rewarding, as they become a treat, as opposed to a constant. The albums final track, "Beneath The Shroud Of Midnight", is an almost entirely synthesized piece, and is utterly beautiful. The drums, too, are a lot more crisp and awake-feeling than many of the atmospheric black metal bands out there, which may be down to the production.

Atmospherically, this album is vast, expansive and gives an air of melancholy, loneliness, and a vast sorrow of some bygone day - Staple evocations of an album in this style. Undying produce these well, with their own unique fingerprint thrown-in. While many bands produce an atmosphere of melancholy and bygone days, Undying add a sinister, possessed, and lurking presence to their music, creating a sound both beautiful and ominous, but also powerful... almost headbang inducing in some places, which much atmospheric black metal is not.

Not the most well known of bands, Undying are, sadly, after much Youtube searching, without videos of any kind. On the plus side, this entire album (demo, call it what you will) is available for free download at bandcamp. And its well worth it.