Alestorm are a relatively well known folk/power metal band from Scotland. "Back Through Time" marks their third voyage accross the seven seas, and, much like their previous albums, the band mixes epic sounding tales of swashbuckling quests with tounge in cheek humour, and generally what can only be described as "fucking about", in the most charming sense of the word. 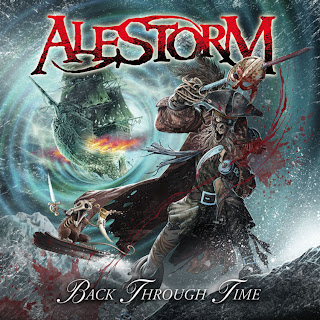 Behind the lush cover art, Alestorm are a damn consistent band of scallywags. Musically, "Back Through Time" is very much like it's predecessors. Fun, at times epic sounding riffs combined with the piratey melodies from one of those keyboard-guitars, combined with reliable bass and drumwork. On top of this resound the traditional pirate-esque vocals of the earlier work, with catchy choruses, which I don't hesitate to presume improve exponentially with the listeners rum consumption. If anything, Alestorm's catchiness has only increased over the years, and I, personally, find this album to be the most catchy so far, and is a rewarding listen, if you get the humour behind it, atleast. It's not deadly serious, but it's not downright silly, it's simply fist pumping, party n' pirates heavy metal banter.

There is certainly more humour and randomness in this album than in it's it's predecessors. While the two albums before it were chiefly pirate based, many of the songs on this album are non-piratey in essence, but have had a piratey twist added on to them - for instance "Buckfast Powersmash" is about a mighty concoction with little relevance to piracy. While many of Alestorm's previous songs have been about alcohol, they references are much more overt on this album. The album does, however, have an epic side, with songs like "Death Throes of the Terrorsquid" being excellent power-metal pieces by anyone's standards, and features some guest vocals by Ken Sorceron of Abigail Williams, which gives the track a vocal edge which makes the song stand out.


Of course, if you don't get Alestorm, this album isn't going to help very much, and I wouldn't recommend it to any of the "Trve Kvlt, only listen to second-hand cassette tapes of songs recorded in ancient pine-forests" variety of listener, or indeed to anyone who likes deadly-serious music, however, if you let the album appeal to the fun side, it's a rewarding and enjoyable listen.