Brazillian folk music fused with death-metal, you say? Could that possibly work? Cangaço,  a band from  Recife, Brazil, have offered up compelling evidence in support of the idea that it can. "Positivo" is the bands first EP, and in the five tracks which the band produce a unique blend of sounds the likes of which I have never before heard, in a show of true originality. 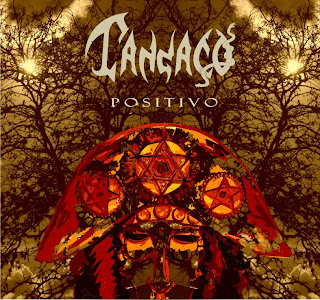 I definitely can't claim to know much - if anything - about Brazillian folk music, however, the characteristics it appears to have come out very nicely in the mix, and the ratio of metal-to-folk seems to be very good. Not so metal as to be insignificant, but not so folky as to diminish from the works heaviness. What emerges is not the gimmicky, somewhat sterile offerings made by some folk-metal bands, but instead is a very solid, pleasing collection of songs. The folk adds a somewhat jumpy, almost upbeat style to the metal, and many of the guitar techniques which must be used in the folk are apparent. Musically, all of the musicians are solid, and play consistently and competently, adept in both of the styles within the musical fusion. Commitment to the folk aspect of the music is apparent - as each, and every, track has something overtly influenced by the folk on it, suggesting the band have become comfortable and lucid within their unique style.

The entire EP has a sort of energy which I've never heard from any death metal, or folk metal band before. The music manages to be upbeat, yet serious and possessing a very much appreciable heaviness, while also retaining the community-like, narrative attributes of folk music around the world. The production also seems to help to this end, with a very organic sound - everything has it's place, it's "balance" in the mix, with each instrument complimenting each other. It's noteworthy that the band don't need to resort to a single folk instrument to create the music, relying only upon the instruments traditional within metal, although it's probably helped by the fact that a lot of guitar work goes on in folk music of the kind which the band fused to metal. All in all, the mixtures of musical style, and the overall sound of the work, in it's own right, it very pleasing, and is thoroughly enjoyable.


The music in "Positivo" is certainly very different, and certainly isn't in-fitting with established metal convention. If your looking for something old-school, of a well established style, there is no question that this probably isn't for you, and for death metal, it's certainly not as heavy as you'd expect, but regardless, It's impressive, fascinating, and I can't deny that I love it.

Links:
Cangaço on Myspace (With a link to freely download the EP)
Cangaço on Metal-Archives