In the early days of black-metal, there were a limited number of stylistic paths that a band could go down. Darkthrone, Mayhem, Burzum and their type went down a path of atmospheric, extreme, and eerie metal. Enslaved, on the other hand, were a bit different. While still maintaining a black-metal sound, Enslaved created a more crisply produced, keyboard enhanced brand of viking influenced black metal. Frost is an album which very much shows this in full force. 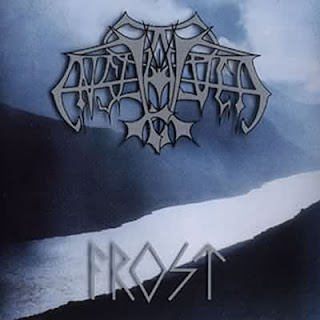 Enslaved immediately stick out as being different to the other black-metal bands of the time, and many audible factors contribute to this. The use of atmospheric sound, horns, and other viking-invoking instruments being conjured by keyboard, and the occasional use of clean vocals, for example in "Yggdrasil", setting the album apart from the other pioneers of the day. The intense atmosphere is complemented by many of the staple-sounds of black metal - Thunderous, blast-beat filled drumming, and tremolo-pick guitar driving the album forward strongly, in an unmistakeably black-metal vein. Vocally, "Frost" makes use of what i'd consider my "favourite" style of black metal vocal - harsh, but evocative, as opposed to simply brutal.

The Viking influence is also very clear. The keyboard elements create a Bathory-esque sound, albeit colder, darker, and more sinister. Enslaved's take on viking-metal is not evocative of valour, honour and pillage, but instead of the strange and surreal, bloody and  world of norse-mythology - giants, gods, and the darkness of the Nordic winter. The songs on frost are intensely listenable. Enslaved's work on Vikingir Veldi was extremely long, generally, and while epic, was hard to absorb. Frost is different - each song feels self contained, and most are very memorable, a fact which is especially aided by the profusion of synth, which adds a dash of true uniqueness to each song.


Production wise, the album is neither here-nor-there. The production does not let the album down, but doesn't bolster it in any way. The lower end seems a little lacking. The drums are excellent, with a typical black-metal sound, with deep, thundering fills, and steady beats, however, there seems to be a bit of a lack of bass, which takes away a bit of the albums momentum and richness... however, the nature of the songs themselves more than compensate.