This was another album I was looking forward to greatly. Judging by the fact that, despite pre-ordering it, it was still sold out before I could get one, a lot of other people were somewhat excited too. Upon listening, there is good reason for this. This album is like a transformation, a "leveling-up" of Cruachan. No longer the accessible, duet vocal folk work, with a black metal influence occasionally poking it's head round the door. In this album, the black metal influence came straight through the door, poured itself a whiskey, and made itself comfortable. And damn does it sound good. 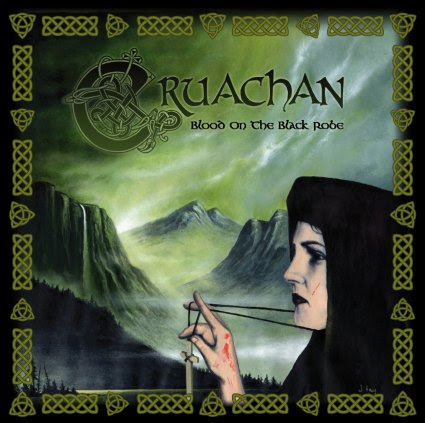 The album wisps in, as if on a breeze, with a short instrumental, but then bursts into black metal life, with the foot-stomping, anthemic "I am Warrior". This seems one of the albums greatest strengths, with the sheer strength of black metal merging excellently with the catchy, storytelling nature of Irish folk music. The album becomes progressively heavier, as the journey continues, with raw tracks such as "Pagan Hate" and "Primeval Odium" being unrivaled in Cruachans catalogue by anything, in terms of sheer heaviness. This album certainly has the most blast beats, and other staple black metal features than essentially anything they have done before. In Cruachan's traditional style, an earlier track is re-done on this record - In this case "Brian Boru's March" which is a somewhat heavier re-working of the earlier "Brian Boru" from the bands debut "Tuatha Na Gael".

This is definitely very different to Cruachans "middle-era" releases, such a "Pagan". Mostly gone are the female vocals, and many of the melodic vocals all-together, replaced by the, until this album, underused black metal vocals of frontman Keith Fay,  which contribute greatly to the albums heaviness. The album feels to me like the spiritual successor to their debut, "Tuatha Na Gael" which is their only album other than this one to swing so far onto the black side of the bands black-metal/folk composite sound, which gives the impression, backed-up by the band itself, that Cruachan are going back to their roots, and they are sounding all the better for it. The musicianship is the best the band have exhibited in a long time, especially the drums, which are faster, more intricate, and tighter than I have heard them ever before.


All in all, there is little to complain about in this album. Those who preferred Cruachan's more mainstream sound, of course, will not be too happy, but those who have always preferred their black-metal edge will be delighted, as this is the heaviest, blackest album they have ever produced, and yet is still excellently retains their folk influence.

This album is 8/10. It met, and exceeded, my expectations.