Enslaved have a fairly extensive and varied back-catalogue of material. "Below the Lights" is vaguely mid-career, an album of Progressive-black-metal, but not, as some of their earlier material, particularly viking metal, although that influence is still definitely detectable in their sound. I've not (yet) listened to every enslaved album, which, admittedly, would be quite a task, but below the lights is certainly the album which reeled me in and made me fall in love with their music. 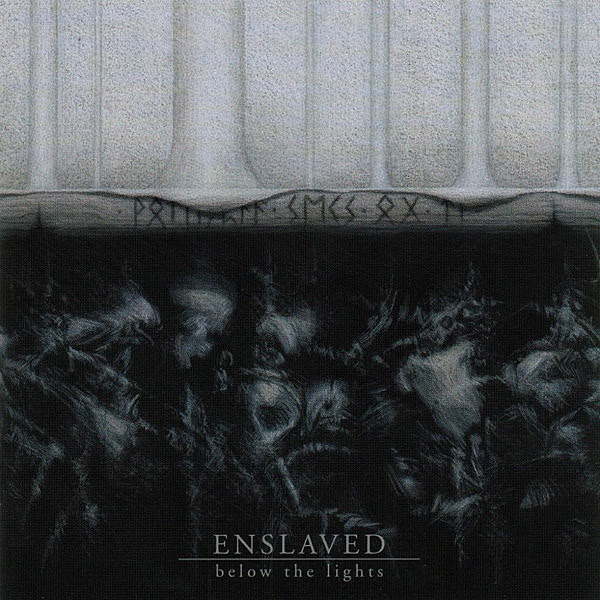 Enslaved create an album brimming with atmosphere, in a way which soaks through into every little movement of the album. It is an atmosphere which flows, but is like a mercenary, with a different direction on each track. The beautifully mournful, apocalyptic atmosphere on "As Fire Swept Clean the Earth" is one of the most beautiful songs I've ever heard, with it's huge wave of sound, which overtakes you and immerses you, like a blast wave... A wave of... Fire, sweeping clean the earth, perhaps. It is broken up by a tiny, beautiful squeal of guitar, which I cannot fully explain, but which brings tears to my eyes, especially the two, slightly longer, more elaborate parts towards the end of the song. I've never heard such a little part, recurring throughout a song, provide so much beauty.

The album is very varied, with a lot of different black metal, and progressive things going on throughout it, most of which is used very effectively to evoke a strong atmosphere. "Havenless" for example, has a nordic chant for an intro which is immensely powerful; As soon as I hear it, I'm practically standing at the prow of a longship, gliding over some deep blue Nordic sea, and in that context, the viking-metal roots very much remain close to Enslaved's heart. The progressive tinge to the album is complimentative, as opposed to the effect it has on some bands. The synth work, especially, works well in tandem with Enslaved's black-metal core. The acoustic-sounding material, in songs such as "The Crossing" also work extremely well, and the bands musicianship as a whole is top-notch.


It took me a while to get into this album, as the songs are heafty, progressive, and complex. While it is still far from conventional black-metal, Enslaved's earlier material, such as "Vikingligr Veldi" was much easier for me to get into, and thus, I'd perhaps not recommend "Below the Lights" as an introduction to Enslaved, although it was mine, and thoroughly drew me in, albeit after I'd spent a while waiting for the moment, and for the courage to listen to it properly.

Below the Lights is easily worthy of an 8/10 rating.