I've not taken many forays into death metal, which is a fact which, upon hearing Bolt-Thrower, I Immediately regretted. However, to look at it another way, Bolt-Thrower, I am told, are about as old-school as they come, and, therefore, a good place to start. Thus, I purchased and listened to "Warmaster". It was good. So very good, and I wish I'd discovered it earlier. 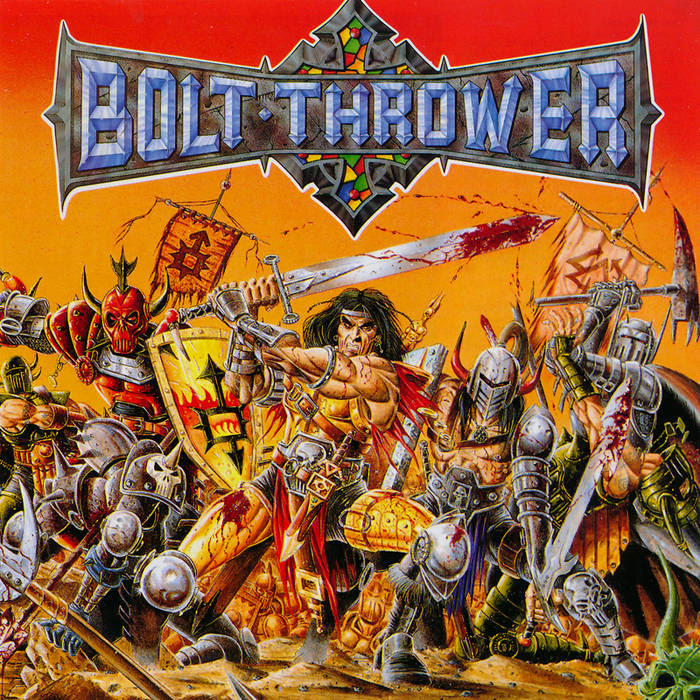 As I emphasised, I don't know much about what makes "Good" death-metal, and can only judge this album on what I hear. I very much enjoy what I hear. The music is quite fast, and the riffs are crushing, heavy, and tightly-played, while retaining atmosphere. The first few songs have essentially become my schemata of "what death-metal-sounds-like" and every song after that felt like a new and pleasing discovery, of something new, something good.  The drumming and guitar combine well, with powerful double kick, which infuses well with the pulsating, heavy riffage. blast beats are not absent, but they are rare, and feel like a very special treat when they do show-up, which, if I recall correctly (I no doubt don't) is only in one song on the album.
The vocals too, are pleasing, with a harsh, but not incoherent vocal sound to which I am quite partial, and they compliment the music well. Certainly, heavier things have been made, but nothing I have listened to quite encapsulates heaviness the way this album does, which has shown to me what I can only describe as a "new" kind of heaviness. I knew of the speed of thrash, the attitude-drenched sound of groove, and the screaming, blastbeat-lunacy of black metal, but this is something unlike any of these things. I can only hope that this can explain and allow you to forgive my clumsiness in reviewing this album. On top of that, the bassist is female, which is ridiculously badass.

Overall, I feel that I couldn't have wished for a better introduction to death-metal, as this band have a little of most of the aspects; Brutality and heaviness, but also is very technically skilled, with riffs that soar, as opposed to stumbling along the ground. I can't think of many criticisms, especially for an excellent band, from a genre I know little about, so I shall not make any.
I give this album 9/10. Death-metal addiction may follow.
Links:
Bolt Thrower on Myspace
Bolt Thrower Offical-site