When I started doing reviews, One of the first bands I reviewed was an unsigned American Thrash/Power metal band, by the name of Krystos. They were, in fact, the first band to which I gave a 10/10 rating, and deservedly so, as they were, and continue to be, exactly what I love about metal. The band themselves, not long after I had written it, discovered the review, and, since then, Vocalist and Lead-guitar, Billy Thornock, has sent me a signed copy of their debut album "Walk through the Inferno". I'm delighted to own such a fine album, and my compliments and deepest thanks go to Billy, and the rest of the band, for their genorosity. As I stated at the time, the album is excellent, and I still recommend it to anyone.

My profound thanks to Billy, and the rest of the band. 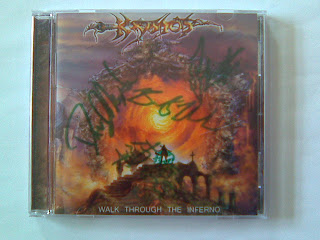