Forever unsung-heroes of the NWOBHM, Venom have had their ups and downs over the three decades they have existed. "Resurrection" certainly represents a high point, with the original lineup, and some superb songs, announcing a relentless return to form for the band, in a very thrashy style, which they themselves had helped to pioneer some twenty years before. 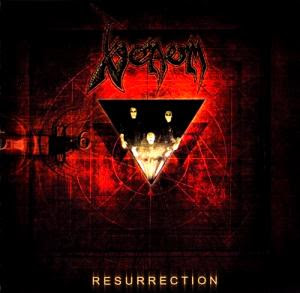 Resurrection doesn't sound much like the the Venom of old. Neither, for that matter, does it sound like the albums which the band have released since. The production, for one thing, is incredibly crisp compared to Venom's norm, which adds a different dimension to the music, making it sharper and angrier. The technical abilities of the band seem also to have increased with age, as all the musicians seem to outperform their previous selves. The guitar work is very impressive, with excellent crunchy riffage, and the most well-placed pinch harmonics I've heard, possibly ever, as well as very solid solos. The song structures, while not groundbreaking, are quite different to Venom's older material, which adds a degree of character and uniqueness to the album. It's certainly not just "More of the same", and for a fourteen-track album, there is substantially less filler than might be expected.

The vocals, too, are quite different. While, of course, they are performed in typical Venom style, in many places they seem much more tuneful than usual, such as in "Leviathan", which has some ridiculously catchy, melodic sounding lines, which are among the best on the album. The drumming, the essential third member of Venom's "Power trio" of musicians, are also good, far better than in the bands early material. The sound suggests that the drummer has taken in a lot of influence since the early days, and the drum-work sounds very modern, with a lot of double-kick work, which is often simple, but extremely effective, with a lot of energy, and at some points, ridiculously high tempos, which makes the band sound youthful, despite their, at the time, twenty-years of existence.

The songs on the album may all be short and to the point, and not the most varied songs ever - They all follow a similar style, but they also share a certain anthemic quality, which will have them stuck in your head for days at a time. I'd go as far as saying that this is one of my favourite Venom albums ever, It's fiercely modern, but it's also unapologetically Venom.