The number of metal bands, when juxtaposed with the small population of Finland, could quite easily lead to the impression that evereone in Finland is a metalhead. While this, of course, sadly, is untrue, They do produce copious numbers of good bands, in a multitude of styles unrivaled by any country of it's size. Hangman were (and to an extent still are, as they seem to have reformed, at least in part) a Finnish traditional metal outfit, and their debut, and only, full length album, "The Gallows" is available to download for free, and is a rather fine work. 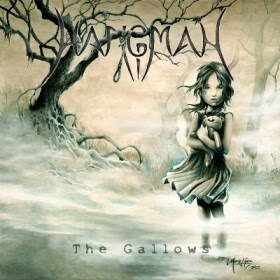 What you get with "The Gallows" Is a pleasing, fairly short listen, composed of mainly three to four minute songs, in a mostly traditional style, although theres certainly a bit of power-metal thrown into the mix, taking into account some of the styles, and indeed the level of heaviness. The band seem to have gotten the balance right, with regards to this, as the music is up to date, heavy, and well produced, but without compromising the bands traditional edge, which prevails throughout the album, despite the occasional harsh near-screamed vocal, or power-metal piano augmented intro. The catchiness of traditional-metal is a great strength of the album, and the songs can become stuck in ones head quite easily, and are seldom annoying when they get there.

For a genre which has been around for what feels like eons, Hangman still manage to do their own thing with it, which is impressive, and creates an album you want to listen to from start to finish, just to see what the next song brings. The album has a lot to offer, with sudden twists and turns, such as the transition from the smooth, power-metal of "Face in the Shadows" to the thrashy, adrenaline pumping "Last Breath" which shows the other, heavier sound of the band, but does not compromise the catchy, traditional aspect, which runs strong in one end of the album and out the other side, despite the transitions in style across the album.


The style of the album is somewhat fickle, that much is true. While traditional is dominant, there are elements of thrash, power-metal, and even rock. This doesn't do to much harm to the album, but makes it's direction seem interesting, and even a little confusing, but it's still an album well worth listening to, as it brings a fresh new take on traditional to the table.

Links:
Hangman on Myspace
Download "The Gallows" on Jamendo!