Theres a lot more to Blaze Bayley than just being "The guy who was in Iron Maiden for a bit". He's been around the block, and has some interesting musical offerings. Promise and Terror is one of his solo albums, and showcases his style far better than anything which he did with Maiden ever did. 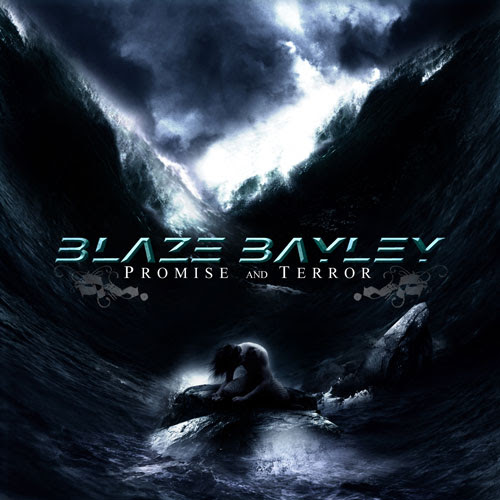 The first, possibly most noticeable thing about this solo material is that Blaze sounds a lot happy as a vocalist, and seems a lot more skilled, natural, and indeed free, compared to his material in Iron Maiden, which is the only music I had encountered him in previously. His vocal range is much wider, and he goes into a lot of styles which are much more enjoyable than the fairly straightforward vocal delivery in Maiden. Bayley's voice alone is an excellent feature of the album, and makes it a good traditional metal release in it's own right, especially for 2010, with so many of the older vocalists fading, and losing their touch, Bayley seems to have only improved, with a unique and enjoyable vocal delivery.

The other musicianship on the album is solid, in a fairly standard tradition metal style, which occasionally borders on something a little heavier, maybe a sprinkling of thrash or indeed power-metal here and there. The guitars are crunchy, and the drums are solid and reliable, with a dash of double-kick every now and again, adding a little modern charm. The "Traditional-but-not-quite" metal sound is very reminiscent of a band I reviewed before - Pharaoh. Although this is probably a tenuous comparison, the crunchy guitars, and indeed the vocal style, are far more in common than I could have imagined.


Essential, I'd regard this as a robust traditional-metal release, with Bayley's vocals shown in their true, unconstrained state, which are far superior to the tiny taster of his vocals which he provided in his time in Iron Maiden. Blaze clearly had a career before that, in various bands, and he may have been as good as he is in this album at that point, for all I know. All that I can say is that, in this album, he's damn good.