In order to balance out the universe, having reviewed fairly less-known bands recently, I felt I'd better do something a little more known, and somewhat more mainstream. You can't get much more mainstream than Metallica, that much is guaranteed, and so I've given Death Magnetic, their 2008 "comeback" album a listen, to see what I can find. It has solos, which is a start. 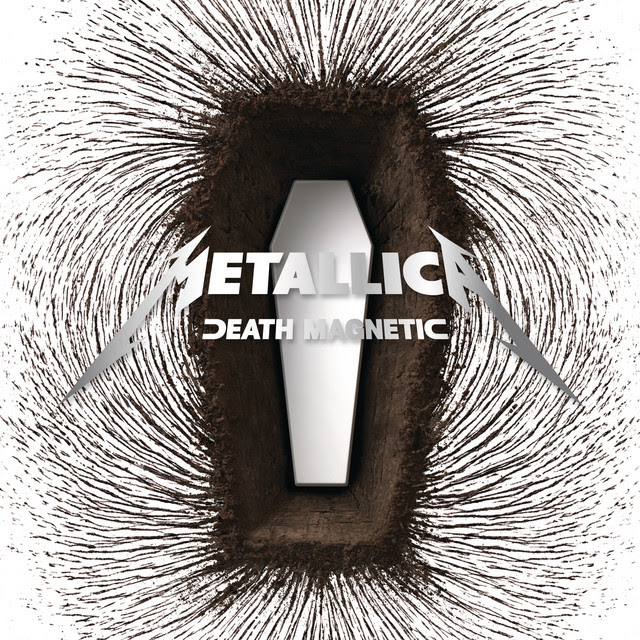 After a long period of playing some, shall we say, different albums, Death magnetic marks an attempt to return to the traditional, thrashy style of old. It works, to an extent, especially with songs like "All Nightmare Long" having a fairly thrashy sound, however, debris from the three albums before it still litter the sound, with little bluesy sounding bits, and other similar detritus knocking around in the mix - not neccessarily all bad, but it hammers home my belief that the band cannot return to their original sound, with so many musical styles having occurred between "...And Justice for all" and this album, the band simply cannot emulate their early style. That said, no two Metallica albums, with the exception of Load and Reload, sound anything like one another.

Musically, there isn't too much wrong with Death Magnetic. It's not what it's so often purported to be, but it's a solid album nonetheless. Songs like "Judas Kiss" are thrashy, with catchy choruses, and the bluesy Load and Reload remnants in the guitars. James's voice isn't what it was, and Kirk's Wah-pedal is overused, as ever, but other than that, the instrumentation is adequate. "The Day That Never Comes" is, in the first half, at least, quite impressive, and most of the songs on the album deserve a chance.


And now... the production. From a production point of view, the album ain't pretty. Its full of clicks, and is mixed far too loud, making it muffled, overly full of fuzz, and sounds pretty horrible at any volume, which is sad, as it spoils the albums many potentially enjoyable songs. The production isn't even bad in a charming way, it's just plain... bad, and sadly, this detracts from the album greatly. Death Magnetic's demo, aptly titled "Demo Magnetic" is, in my view, the album that this should have been, and I'd urge everyone to give it a listen.

I give Death Magnetic 6/10. With better production, it could creep up to 7.