Yet another free one, Poisongod are a Brazilian thrash band, with, as the album title suggests, some very political themes. The band's approach to thrash is that of the newer incarnation of the subgenre, and is done rather well, albeit with a few rubs here and there. 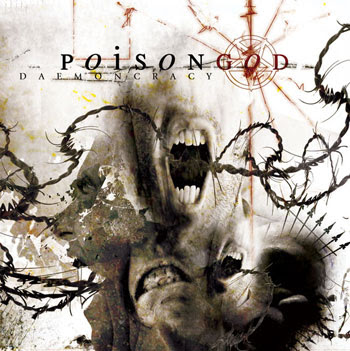 "Daemoncracy" has some fairly clear influences, with Lamb of God being quite a glaring one. While Poisongod are somewhat thrashier than said band, there is certainly a liberal sprinkling of groove metal within their sound, most notably in songs like "Genesis Protocol", which exhibit some staple groove riffs. Another influence I interpret within the bands sound is Megadeth - The bands sound, and indeed, political themes, remind me heavily of Megadeth, particularly the "United Abominations" album, both in terms of sound and aesthetic. However, the vocals on the album stand out as quite unique, with a sort of dry strained shriek which is quit  unlike a conventional thrash, black, or even death-metal vocal. I cannot, at this time, make my mind up whether these vocals are positive or negative, although their originality is, nonetheless, appreciated.

From a technical point of view, the album is quite accomplished, with tight solos on many songs, and good musicianship all-round, especially lead guitar, and indeed drums, which were on a fairly high point of the drumming spectrum. The production on the album isn't the best I've ever heard, and can be quite "clunky" and has a bluntened, slightly shallow feel, which can prevent the music from reaching it's full potential.


Sadly, despite the albums good points, it has a rather generic sound, and does little to rock the boat. Many of the thrash/groove riffs, which are, might I add, pretty tasty, are somewhat universal. The intro to "Genesis Protocol" for instance, sounds almost exactly like Lamb of God. That said, the Lamb of God song involved - Laid to Rest, sounds eerily similar to Testament's "Into the Pit"... and thus the circle of life continues. Nonetheless, Daemoncracy is a solid-enough release.