Corrosion of Conformity have played more styles of metal, and indeed, at some points, hardcore punk, that I'm able to keep track of. However, Wiseblood, their follow up to "Deliverence" is indisputably fantastic southern metal, laden with sludgy and magnificently heavy tones, and is an album which truly excells, sounding so organic and natural, in being so reminiscent of what the band intended. 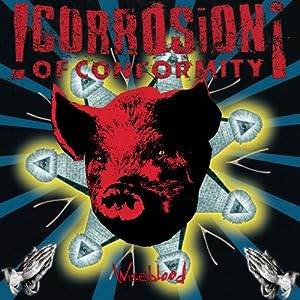 From start to finish, Wiseblood is dripping with raw attitude and power. Southern Metal is not a genre well known to me, but If all of it's bands produce material as good as this, It's certainly a genre I intend to investigate. Songs like "The Door" have you feeling badass merely listening to them, such is the extent of the mindblowingly catchy, earth shattering sound, which rivals bands like Pantera in terms of sheer attitude, which is quite an accomplishment.

Musically, I find the band very likeable. The thick guitar sound is what imbues the band with the attitude upon which I have overly focused, and the solid, dependable drumming, which is a pleasure to listen to, and is quite different to traditional and conventional metal drumming, with interesting time signatures and approaches, which make the drumming engaging, and make it fit the music like a glove. The vocals too, with a Lynard Skynyrd meets Metallica vibe, are very fitting to the music, adding to it's overall southern stylings.


Overall, Wiseblood is certainly an interesting record, and it feels very complete. I looked, but could not find, and filler tracks or half-assed work, which adds to my theory that this is the finely honed product of a band who were playing from the heart, and were happy with what they were creating, in it's enteirety.

I give it 9/10, easily. Anyone could enjoy it, even if Metal is not your first choice of music.