Razormaze are a young and thus far little-known thrash band hailing from Boston. Thrash is currently undergoing something of a rejuvenation, with bands of an oldschool and new style emerging in equal measure. I have to say that Razormaze lie somewhere in the middle, sounding like something between Anthrax and Slayer, but with unique and exciting characteristics of their own, in a style that hasn't been heard in thrash in quite a long time. 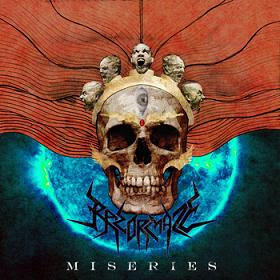 "Miseries" is a cute and pleasing little EP, which is downloadable for free on the bands Bandcamp account. I downloaded it from there, expecting a full-length album, but I was not dissappointed, after listening, by the three tracks of the EP. The first, and dare I say best, part of the songs was the vocals; Anthrax influenced from the onset, you'll certainly be able to hear shades of Belladonna in this vocalist, albeit a Belladonna who has been crossed with Tom Araya. The EP's opener, "Karma in/Karma out" is particularly Anthrax like, but very much in a pleasing way, as opposed to in a plagiarist way.

The arrangement of the songs is certainly a cut above many of the retro-thrash bands out there, with inventive blending of lead and rhythm guitar, and fantastic solos, which fit into the songs very well. Overall, this results in a style which is very bouncy, and almost cheerful, which results in, and forgive me for mentioning Anthrax again, a sound quite like theirs, but also causes the thrash to lack brutality, although upon listening, other factors certainly make up for this, not least the catchiness. Most songs take a while to get into my head, but not these.


I wouldn't say this EP is adventurous or groundbreaking, but I'd definitely credit it as being a cut above most of the retro-thrash out there. It's not hugely deep, it's not one of those mystical, inspiring albums, but I'll tell you something; It gets your head nodding, and it sounds awesome.