I would have reviewed this album days ago, but I missed the window to pre-order, and, thus, my copy only came today. But they say good things are worth waiting for, and "Misanthropic Slaughter" is doubtlessly a good thing, which, despite my review of the band's EP very recently, I feel it is worth it to bring the band into a review once again, as this is an album which should be known about. 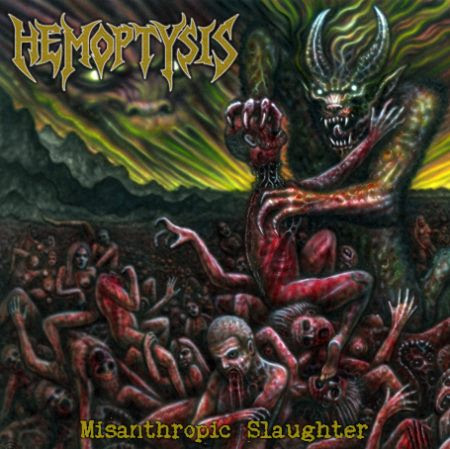 Hemptysis have produced an interesting debut, That much is clear. There are cleaving, rasping riffs which equal and surpass the work on their first EP, but thrown into the mix are beautiful guitar parts, which give the album a smooth, more refined edge, along with solos which are unbelievably clever and numerous. Theres even a little track called "Interlude" which has Electric Sitar in it. This gives the new album a burst of extremely talented and impressive arrangement, and the musicianship has improved too, with all members performing excellently.

The band have also retained their unique blend of thrash, and I have yet to discover a band they resemble greatly. The vocals sound a lot like Arch Enemy, while the riffage sounds like Megadeth, but when all of the instruments combine, The band is somewhat unique, especially in the solo style. What happens with the guitars effects-wise, and how they are played, are truly inventive, especially in the slow bits, of which there are a few, and which really add to the music immensely, especially the sitar solo, which is mindblowigly unexpected, and adds a sprinkle of beauty among brutality.


This is a strong album, and there is little which grates against me in any way. The vocals could do with a little variation, but they're very strong, although also very consistent, almost too consistent, with all of the songs sung in the same style. This does, however, mean that all of the songs are appealing to the same part of my metal taste, which means that I have a whole album full of songs which I like, without any weak ones in-between.

This is a ridiculously good Debut, and I'm going to fork out a 10/10 rating for it.