Most Power-metal originating from Europe is substantially different from it's American cousin, but the spirit of American Power-metal has evidently been taking trips abroad, as it is very much alive and well, in a band of unsung heroes of Power-metal; The Danish band "Iron Fire".

One of the more recent of their six albums, "To the Grave" epitomises Iron Fire's speedy, pleasingly crunchy guitar, and clean well controlled vocals. It deals with some very traditional Power-metal themes; Battle, Fantasy, and Heavy-Metal itself. 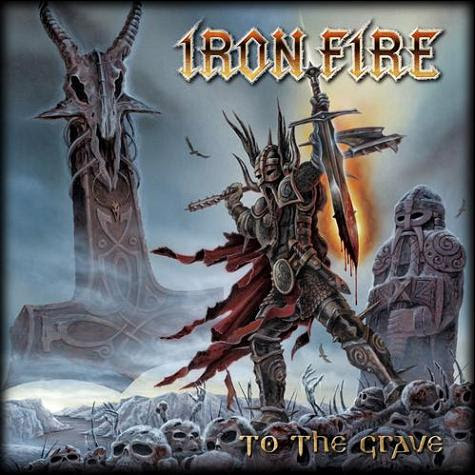 Iron Fire have an impressive back catalogue; There were four albums previous to this one, and they have released another since, However, they are very little known outside of Denmark. Listening to the album, I can utterly conclude that this should not be so. Songs such as "Hail to Odin" are high-speed power metal masterpieces, with excellent instrumentation and arrangement, the lead and rhythm guitar functioning in excellent unison, with impressive solos, which receive less emphasis within metal than they once did.

Although the drum-work is tight, and the vocals are very good, Guitar is certainly the dominating factor in the album, with an extremely crunchy, almost "munching" guitar sound, which I wager is one of the factors which will make or break the album to the listener.

Another make or break factor is the vocals. They are clean, high, and very well controlled, as has always been a staple in Power-Metal, however, they have a very whiny, slightly sneering edge in places, which takes a while to get used to. Truth be told, Iron Fire are a band which take a lot of getting used to in general, and it took me multiple listens of many songs to fully enjoy them. I urge anyone who is into power metal to give the band, and this album, a try.

Bare in mind that it's not the most straightforward band to become addicted to, but it is very rewarding to do so, if you ask me.

I give the album 9/10. It should be much better known.